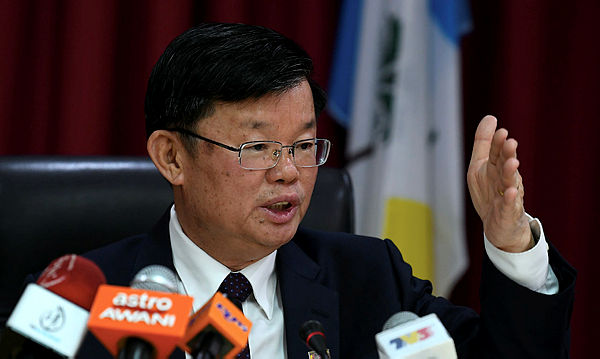 GEORGE TOWN: The Penang government remains committed to delivering substantial benefits to the people through the development of the state.

In his message in conjunction with Christmas celebration and New Year 2020, Chief Minister Chow Kon Yeow (pix) said the state government under his leadership would do so as decreed by the Yang di-Pertuan Agong, Al-Sultan Abdullah Ri’ayatuddin Al-Mustafa Billah Shah during His Majesty’s visit to Penang recently.

Chow said His Majesty had called on people of Penang to live in harmony and set a good example as a multi-ethnic and multi-religious state.

“His Majesty believes that with the enthusiasm and commitment shown by the state government leadership, the people will enjoy the results of the implementation of the Penang Vision 2030 towards a ‘Green and Smart State based on Family that Inspires the Nation.

“The state government will adhere to the decree (of Al-Sultan Abdullah) and seeks to ensure that the development of the state can benefit all people and create a sense of unity and tolerance as practised so far,” he said.

Chow said the implementation of the state’s development included welfare programmes, the provision of a good education, fighting for gender equality, living in a green and healthy environment without neglecting existing cultural values and strengthening the development of human and youth capital as a whole.

“It is my hope that the state development plan, especially in terms of infrastructure development, particularly the implementation of the Penang Transport Master Plan can be carried out successfully to boost the state’s economy by involving all parties.

“It is in the interests of the future generations,” he said.

Chow also expressed his hope that the year 2020 would take Penang to greater heights.

He said Penang, which is among the top contributing states to the nation’s gross domestic product (GDP), was set to start 2020 by continuing to strengthen its tourism sector by supporting Visit Malaysia Year 2020 through its ‘Experience Penang Year (EPY) 2020’ campaign with the theme ‘The Diversity of Asia’.

“Penang will continue to move towards a ‘smart city’ and will continue to pursue the diversity of excellence on the world stage in line with the Penang Vision 2030. These achievements would not be possible without the full support of the people of Penang,” he said. — Bernama