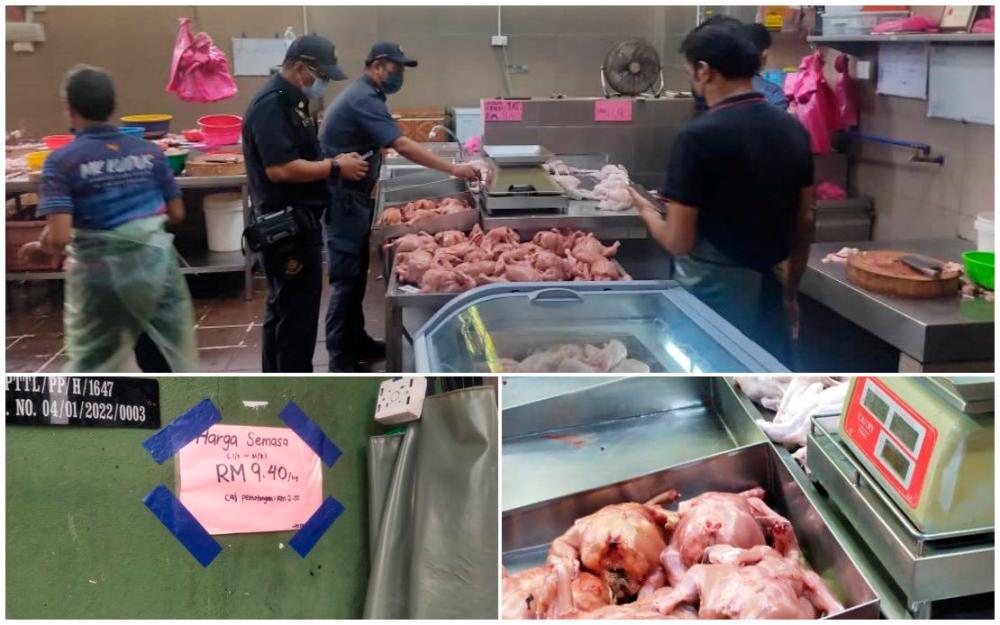 GEORGE TOWN: The Ministry of Domestic Trade and Consumer Affairs, Penang branch has so far received four complaints on chicken sellers not displaying the price tags at their trade premises after the new ceiling price was introduced on July 1.

Its enforcement chief, A. Mogan said that based on the inspections conducted following complaints received from the public and customers at the premises, it was found that besides the chicken price tags, the charge of cutting the chicken into pieces was also not displayed.

“So far, one of the four complaints has been acted upon under the Price Control and Anti-Profiteering Act 2011 by issuing a compound notice for not displaying the price tag by a trader in the Northeast district, here, while the other three cases are still under investigation.

“Based on our monitoring, the traders are believed to have resorted to this malpractice in order to sell chicken at higher than the ceiling price of RM9.40 per kilogramme (kg).

“Consumers are urged to make complaints if they find traders charging more than the set ceiling price of chicken while the traders must also display the price tags including the butchering charge to avoid causing confusion to the buyers,” he said when contacted today.

The Cabinet at its meeting on June 29, decided not to float the price of chicken but to continue with the subsidy and fixing the retail ceiling price of standard chicken at RM9.40 per kg in Peninsular Malaysia from July 1.

Meanwhile, Mohan said there was no shortage of subsidised cooking oil of 1 kg packs reported in Penang so far.

He said each day, the Penang KPDNHEP enforcement officers were not only monitoring the retail shops and hypermarkets but also the producers, repackaging companies and wholesalers of subsidised cooking oil to to ensure its availability and sufficient supply.

“The quota for repackers of the 1kg packs of cooking oil is 3,434 tonnes involving 25 companies in the state and our monitoring and inspections found no supply problem.

“However, at the retail shops and hypermarkets, the packets of cooking oil were bought up by shoppers in less than an hour each time, while these outlets are exercising control by limiting three packets for each household.

“Meanwhile, there are also repeated purchases made by inconsiderate consumers and traders who are taking advantage of the cheap price of the packets of cooking oil,” he added. - Bernama Kyrgios beats No. 1 Medvedev at Montreal, Alcaraz and Tsitsipas ousted Alleged British IS ‘Beatle’ charged after arrest in UK: Police Kyrgios beats No. 1 Medvedev at Montreal, Alcaraz and Tsitsipas ousted

Alleged British IS ‘Beatle’ charged after arrest in UK: Police

1.Kyrgios beats No. 1 Medvedev at Montreal, Alcaraz and Tsitsipas ousted

2.DBKL plans to close Jalan Tar to traffic every Sunday to encourage culture of walking

4.Alleged British IS ‘Beatle’ charged after arrest in UK: Police