People should be ashamed to continue supporting Umno: Dr Mahathir 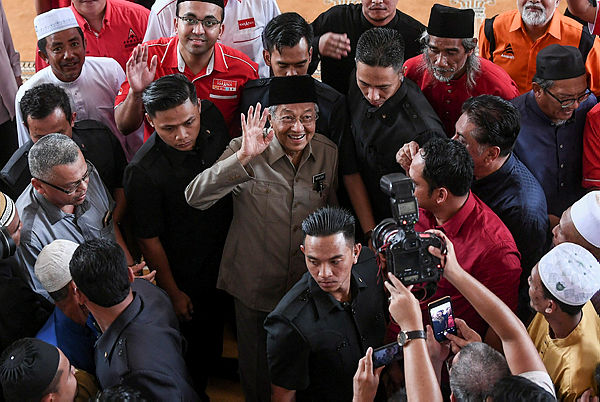 KUALA LIPIS: Tun Dr Mahathir Mohamad said people should feel ashamed of continuing to support Umno and Barisan Nasional (BN) because their past leader was a kleptocrat.

The Pakatan Harapan chairman said not only were both (Umno and BN) rejected by the people in the 14th general election (GE14) last year, Umno president Datuk Seri Najib Abdul Razak, who is facing numerous charges for abuse of power, was also rejected by his own party members.

“In GE14, BN for the first time was rejected because its leader was a thief, the whole world knows and called him a kleptocrat, that is the name given to Najib.

“Aren’t we ashamed (to support Najib again)? That is why the people kicked Najib out, to prevent him from continuing as prime minister and Umno also threw him out (from continuing as president of the party),” he told thousands of people at a gathering in Sungai Koyan, near here, in conjunction with the Cameron Highlands by-election.

Dr Mahathir, who is also a former president of Umnow, and 22 years at that, held the view that the oldest party in the country along with its components in BN did not have much of a future in the new political landscape.

He said they had come to see him to voice their intention to join Bersatu, of which Dr Mahathir is also chairman.

Thus, he said there was really no need for BN to field a candidate for the (Cameron Highlands) by-election.

“No need to contest again, Umno people themselves are rejecting Umno, many are asking to join Bersatu and Pakatan Harapan, because they no longer have faith in Umno, so what for pick Umno people, Umno is gone, what is left is a party of thieves.

When asked by reporters afterwards about Najib’s title as ‘King of Trolls’, Dr Mahathir said the former prime minister was just looking for sympathy and support from the people after facing various criminal charges in court.

He said the actions of the Pekan MP were part of his efforts to create the perception amongst the public that he was the victim.

Dr Mahathir also reiterated that Manogaran was the ideal candidate to represent PH and the decision to field him received full support from all parties under PH and the issue of Manogaran being an unsuitable candidate did not arise.

“He is an ideal candidate, Insya-Allah (God willing), he is not alone as we are all behind him.

“I want to appeal to both, the red shirts (PH members) and others, regardless of whether they are Malays, Orang Asli, Indians or Chinese, don’t vote for BN or Umno candidates, vote for PH ... to show that our fate is in our hands, if we cast our ballots wrongly we will become the victims, so vote for PH for security,” he said.