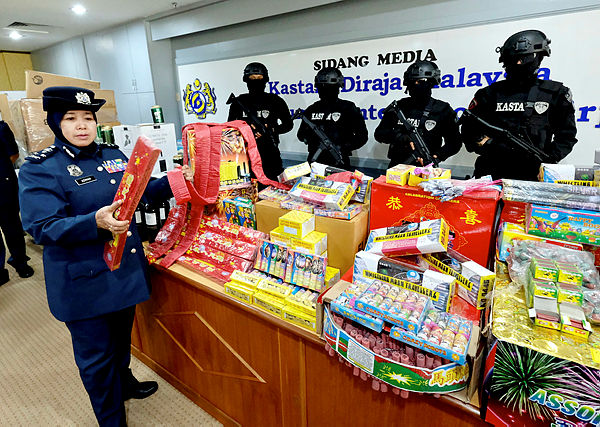 IPOH: The Perak Royal Customs Department has seized 20 tonnes of firecrackers and fireworks in what is believed to be the biggest such seizure by the department last year.

An enforcement squad seized the firecrackers and fireworks, valued at RM263,480, from a double-storey semi-detached house in Jalan Lahat Mines 9 of a housing estate in Lahat near here at 9pm on Dec 27, Customs assistant director-general (enforcement) Datuk Azimah Abd Hamid said today.

She said the squad arrested a 37-year-old man at the house where he had stored 640 boxes of various types of firecrackers and fireworks on the ground floor.

“This is the biggest seizure of firecrackers and fireworks by the Perak Customs Department last year,” she told a press conference at the Enforcement Division of the Ipoh Customs Office.

Azimah said the market value of the seized firecrackers and fireworks, believed to have been smuggled in from China, was estimated at RM3 million and the unpaid duty, RM171,262.

She said the man was being held under remand for eight days from Dec 28 to assist in the investigation into the storage of prohibited goods.

Azimah also said that throughout the last year, Customs made 93 arrests and seized 170,168 litres of liquor valued at RM1.15 million on which the duty was estimated at RM3.9 million.

Azimah appealed to the people to provide information to the Customs Department to help combat smuggling of vehicles, firearms, cigarettes, liquor and fireworks.