‘Phoenix’ Muhyiddin rises to the top 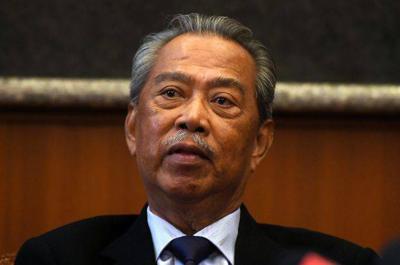 PETALING JAYA: He was sacked by his former boss, left out in the cold and his political career was as good as gone.

But yesterday, Tan Sri Muhyiddin Yassin (pix) returned as the nation’s most powerful man, having been sworn in as Malaysia’s eighth prime minister.

His ascension came in the middle of an unprecedented political crisis that led to the fall of the Pakatan Harapan (PH) government, of which he was a part, and which he later abandoned.

Muhyiddin’s downfall came in July 2015 when he was sacked as deputy prime minister by then prime minister Datuk Seri Najib Abdul Razak for airing his views over the 1Malaysia Development Bhd scandal.

He was subsequently sacked by Umno, of which he was deputy president, and essentially left out in the cold.

But Muhyiddin later returned to the political arena as the president of newly-formed Parti Pribumi Bersatu Malaysia, which later became a component party in PH.

PH went on to unseat Barisan Nasional in the May 9, 2018 general election, and Muhyiddin returned to the Cabinet as home minister.

Yesterday, the 72-year-old took the helm of a new government, taking over from Tun Dr Mahathir Mohamad, who had led the administration since it swept to victory in 2018.

Muhyiddin’s swearing in at Istana Negara before the Yang di-Pertuan Agong, Al-Sultan Abdullah Ri’ayatuddin Al-Mustafa Billah Shah, came following a week-long impasse that saw intense political manoeuvring by both sides of the divide.

His courage in openly criticising the BN government for its alleged involvement in corruption is finally vindicated.

However, Muhyiddin’s appointment has not come without criticism. Many have questioned his decision to work with the party and leaders he once denounced amid doubts about his claim to have majority support in Parliament.

Even until yesterday morning, PH attempted to convince the King that Muhyiddin did not enjoy the majority support, but the ruler kept to his decision, and Muhyiddin finally rose to the top.

Mahathir said in his press conference yesterday that Muhyiddin had been working to get the number one post for some time but how much of this is true remains uncertain.

Muhyiddin’s quick rise over the past week was, however, unexpected.

In fact, his name was only mentioned as a possible prime minister candidate on Friday when Umno and PAS revealed they nominated him to the King.

With the dust beginning to settle over the week-long political crisis, Muhyiddin now faces the tough job of leading what is one of the shakiest governments the country has ever had.

Universiti Kebangsaan Malaysia political analyst Prof Datuk Dr Shamsul Amri Baharuddin is convinced that Muhyiddin is the right man for the job and to steady what is deemed as a very shaky boat.

“He is a very experienced politician. He has what it takes to stabilise the new government and usher in positive changes.” 3.S’pore to hang another Malaysian for drug trafficking