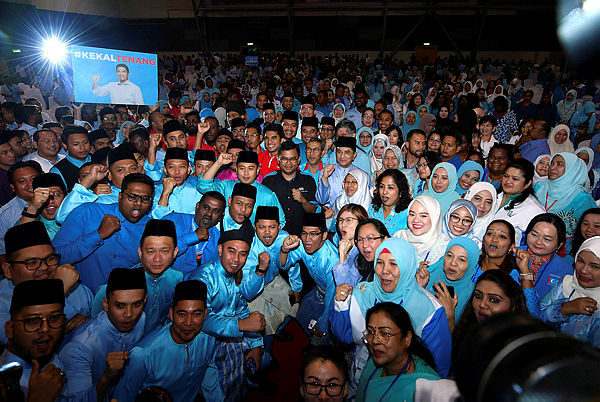 Deputy President of PKR Azmin Ali takes a commerative photo at the opening ceremony of the PKR Women and Youth Congress in Malacca, yesterday — Bernama

MALACCA: All PKR members — from the grassroots to the top leadership — should adhere to and respect the party’s code of discipline to maintain the party’s image and reputation, said a Youth representative at the 2019 PKR Youth Congress here today.

Perak representative Mohammad Rukhairil Aizat Mohamad Maharani said the actions of members of the Youth wing who used the name of the organisation or party without party consent in voicing out their personal views could be considered as ‘traitors’ and such individuals should be rejected from the party.

He also called on the party to sack leaders, especially those in the Youth wing who had not been attending meetings for a long time without reason.

“The presence of this group, especially in the Youth wing, is not encouraging and clearly demonstrates that their commitment and dedication to the party, is not as expected.

“Give way to those who are of more caliber and reform-minded,“ he said when tabling his motion in front of about 1,000 delegates at Dewan Klasik, Melaka International Trade Center (MITC), here.

The nearly three-hour session involving 14 speakers, among others, urged all members of PKR Youth to strengthen unity in the party to make PKR the dominant force in the ruling coalition.

Penang representative Nor Afni Md Yusuff said all PKR members should continue to focus on fulfilling the promises made in the manifesto during the 14th General Elections.

In the effort to fulfill the promise of reducing the cost of living, he suggested that the government issued more price guides, reduce imports of foreign goods and create a platform for citizens to interact directly with the ministry without restrictions.

He urged the government to take immediate action to address some of the pressing issues affecting the youth, such as the National Higher Education Fund Corporation (PTPTN) loans, minimum wage, cost of living and job opportunities, which were yet to be resolved.

“We have to fight for the young people out there who face all kinds of challenges...a promise is a promise. We need a new policy of uplifting the youth, regardless of their race and background.

“The PTPTN issue has not been resolved, the minimum wage of RM1,500 has yet to be set, the oil price has not been lowered and the toll issue is also still pending,“ he said during the debate.

He said PH’s defeat in the last Tanjung Piai parliamentary by-election could be considered as the people’s ‘referendum’ against the PH government, and that the message should not be ignored. — Bernama