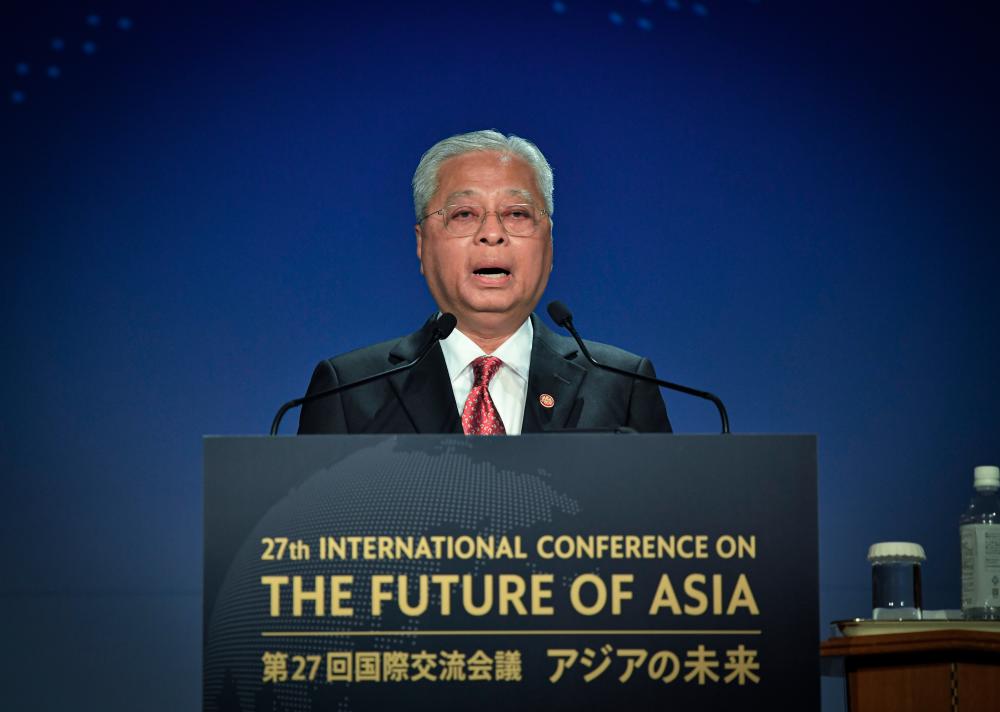 Sharing his views on the matter at the conference, also known as the Nikkei Conference, he said they were strengthening regional economic integration, strengthening cooperation and consultation mechanisms, as well as cooperation in addressing the challenges of climate change.

“These are among the things that can be given attention to in offering solutions to global issues and at the same time, enhance multilateral cooperation among countries in Asia,“ said Ismail Sabri in his inaugural appearance at the annual conference with the theme “Redefining Asia’s Role in a Divided World” for this year.

Ismail Sabri said the main thing in strengthening regional economic integration was to focus on efforts to strengthen the ability of the Asian region in dealing with changes in globalisation after the Covid-19 pandemic.

With globalisation now on the decline, he urged policymakers, as well as business leaders in Asia, to step up efforts to strengthen regional cooperation in ensuring sustainable economic growth.

He said efforts should also be made to make the regional supply chain more resilient through the support of digital infrastructure investment and facilitate efforts to develop capacity towards enhancing the local supply chain.

Policymakers in Asia should also double their efforts to enhance the capabilities of Micro, Small and Medium Enterprises (PMKS) as one of the main drivers of economic growth and development in the region, he said.

He said the large-scale and comprehensive digital transformation involving PMKS enabled them to participate more actively in cross-border e-business activities, with the pandemic having made the entrepreneurs realised the need to adopt digital solutions and technologies to remain relevant.

He said policymakers, in both the private and public sectors, needed to work together to build strong logistics networks, build financially-linked digital market infrastructure in the supply chain, and promote the development of innovative digital technologies to enable PMKS to increase their participation in cross-border e-commerce activities.

This is done through the ASEAN mechanisms such as the ASEAN Regional Forum, the ASEAN Plus three meeting, and the ASEAN Plus Defence Ministers’ Meeting, where the platforms concerned remain active and prove the concept of musyawarah (discussion) can be done between leaders and stakeholders for regional security and peace, he said.

Through ASEAN, he said, member countries held constructive dialogue, promoting a peaceful way of finding solutions to every dispute and strengthening cooperation to address global challenges together based on the ASEAN Centrality.

“Disputes are resolved through diplomacy, pragmatism and compliance with international laws which are upheld by ASEAN member countries,“ he said.

Ismail Sabri said in an effort to strengthen Asia’s role through regional cooperation mechanisms, the ASEAN member countries needed to be careful in responding to existing and new issues.

“There is no need for a new framework, instead the existing platform can be used for the purpose,“ he added.

In calling Asia and the global partners to work together to address the challenges of climate change, Ismail Sabri said Asia, especially Southeast Asia, was the region most vulnerable to the effects of climate change.

In 2021, he said, more than 57 million people became victims of climate change-related disasters in the Asia Pacific region and by 2050, much of Asia had been predicted to face extreme rising temperatures, rainfall and heat waves, which will wreak havoc on the economy and society.

He said it was time for policymakers to accept the fact and admit that climate change would require changes in efforts towards preserving regional peace, prosperity and security.

“The climate change crisis is a global issue and no country can handle it alone,“ he said, adding that for developing countries, it was very worrying as the cost and capacity needed to deal with it would erode resources to create economic opportunities for the people.

He said Malaysia was committed to working with countries with a vision to address climate change, and described the “Asia Zero Emission Community” inspired by Japanese Prime Minister Fumio Kishida as a good starting point.

Ismail Sabri said given its economic strength and influence at the global level, the Asian region was in the best place to navigate change, thus forming a new status quo based on universal awareness and determination.

“Malaysia remains committed to moving forward together with its neighbours in Asia in finding the best way to address the current challenges in a more meaningful way,“ he said. - Bernama