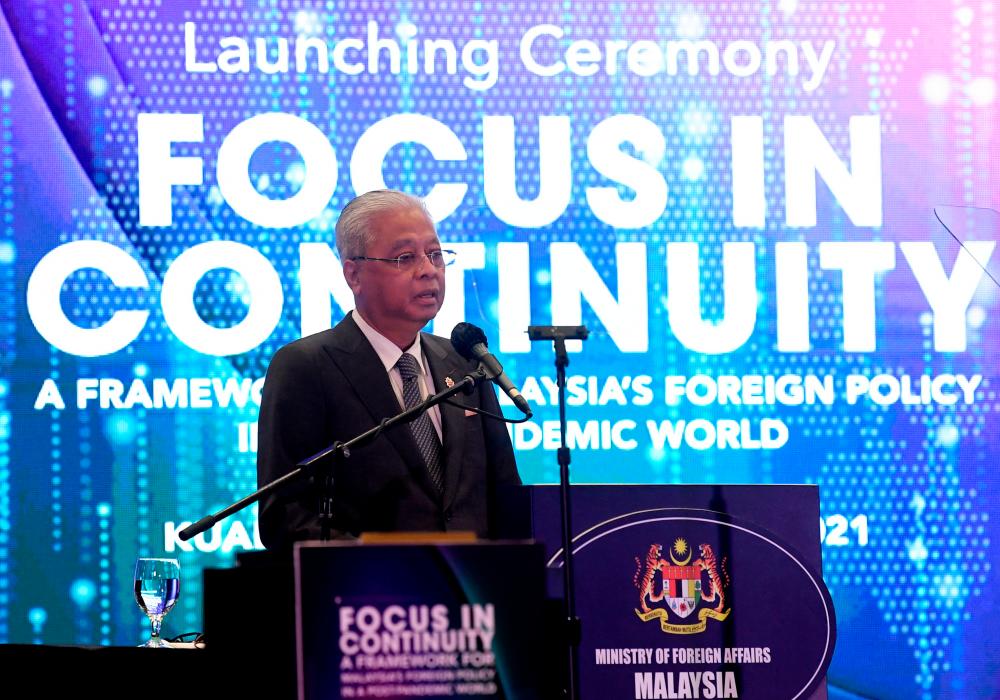 He said the framework recognises key challenges and identifies numerous emerging global trends as well as issues that should be given utmost priority in the immediate term.

It encompasses two pillars, first the current realities and challenges that require the Government’s immediate actions, especially those brought about by the Covid-19 pandemic; and the second Malaysia’s medium- and long-term foreign policy direction.

“The framework is a pragmatic and holistic living document that sets clear and focused steps for the country’s foreign policy to achieve its ultimate goal in fostering a more peaceful and prosperous future,“ Ismail Sabri said in his speech at the launch of the Foreign Policy Framework.

Among those present at the launch were Malaysian Foreign Minister Datuk Saifuddin Abdullah and his deputy Datuk Kamarudin Jaffar, heads of missions to Malaysia, and members of the Consultative Council on Foreign Policy (CCFP).

The framework focuses on eight priorities whereby Ismail Sabri said the first is to revitalise Malaysia’s links to the global economy, by focusing on establishing close cooperation with other countries on the international platform.

Second, the framework focuses on pursuing health diplomacy beyond the mere act of receiving or donating vaccine and other medical equipment.

This, he said, would require Malaysia to be directly involved in the manufacturing and managing of the vaccine supply chain worldwide.

Third is to develop digital economy which is one of Malaysia’s pivotal drivers for economic growth, while the fourth is to shape international cybersecurity norms and laws to protect Malaysia’s national interests.

The sixth priority is to promote peaceful coexistence between nations, people of different faith, religion and culture, he said adding that diversity if accompanied by respect and mutual understanding, is a powerful tool to navigate towards a successful global recovery.

Ismail Sabri said and the seventh is upholding multilateralism and the final priority is to strive to enhance the nation’s undivided attention and commitment to achieve the goals laid out in the United Nation’s Sustainable Development Goals (SDGs).

The prime minister said he is confident that the Framework, being a pragmatic and holistic living document, will carve the path for Malaysia to emerge stronger and more resilient than before the pandemic, and at the same time allowing Malaysia to become an active and dynamic member of the international community.

The prime minister also commended Saifuddin and his team for taking positive and vigorous efforts to formulate the Framework, which adopted the Whole-of-Government and Whole-of-Society method by employing the syura or consultative approach that resulted in the development of of the document which is inclusive and holistic. — Bernama