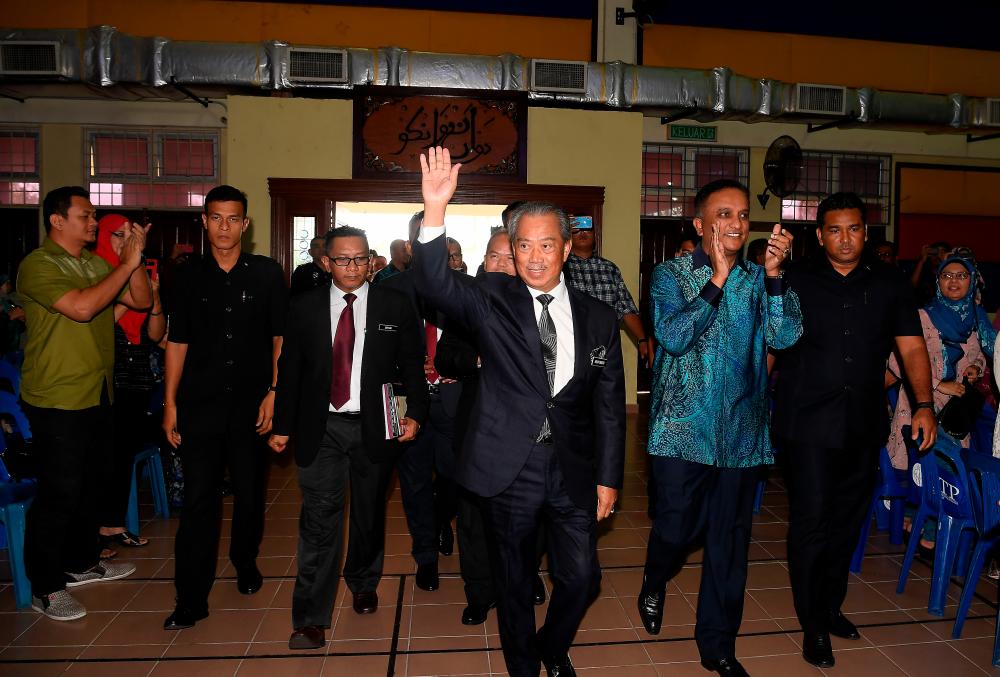 Prime Minister Tan Sri Muhyiddin Yassin waves to students, parents and teachers during a surprise visit to Sekolah Sultan Alam Shah to congratulate students who had excelled in SPM 2019. - Bernama

He arrived at the school to thunderous applause by the stunned students.

Muhyiddin was then escorted to the school hall by Education Ministry secretary-general Dr Mohd Gazali Abas, school principal Salleh Ismail and SAS Parent-Teacher Association (PIBG) president Datuk Seri Reezal Merican Naina Merican, before presenting SPM certificates to nine outstanding students who obtained all A+ (10A+ and 9A+) in the 2019 SPM examination.

“This is my first public public programme, and specifically at the Education Ministry level, that I am attending as the Prime Minister. I am extremely proud to be here at this school which has achieved such excellence,” said Muhyiddin, who was sworn in as the 8th Prime Minister on March 1.

“I didn’t expect I would be asked to give a speech because I only wanted to pay a surprise visit, to see how parents and children come to collect the SPM results,” he added.

Muhyiddin also said that he had visited the school before.

“That’s why today I am here again to be with the teachers and parents as well as students to share in their joy as SAS has been crowned the top school in the Federal Territory of Putrajaya in SPM,” he said.

He also congratulated the top students and dedicated teachers as well as the committed parents for the children’s success.

Muhyiddin said the government was committed to making the country’s education system even better so that it would produce students who would have good command of various fields, especially in science and technology, as well as be well-versed in English and Bahasa Melayu.

“As the nation’s new Prime Minister, I am committed to seeing our education system produce students who are excellent and capable of achieving outstanding results, not just excellent but par excellence, more brilliant than brilliant,” he said.

After presenting the certificates to the top students, Muhyiddin then took the opportunity to meet and interact with the parents and teachers.

Apart from the nine top students, 64 of the 157 SAS students who sat for the SPM also achieved all As in the examination.

SAS, which scored a National Average Grade Point of 1.17, was also third best in the 2019 SPM among the boarding schools. - Bernama