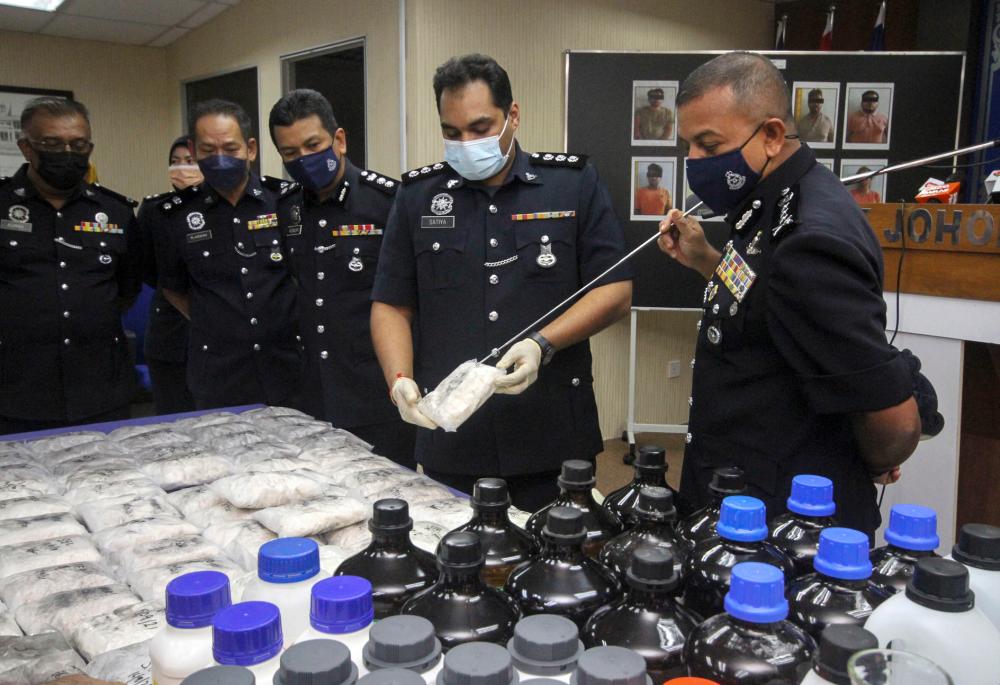 According to him, the syndicate had used a gated and guarded two-storey terrace residential unit in Iskandar Puteri to store and process the illicit substance.

“In the first raid at the two-storey terrace house, police detained a man aged 30 with an unspecific amount of drugs and drug processing paraphernalia. A background check revealed that the man has eight previous record involving drugs and crime.

“Following the raid, police conducted six other separate raids and detained seven men and two women aged between 20 and 34 years-old. They all tested negative for drugs. However, five of them had previous records involving crime and drugs,” he said at a press conference here today.

He also said following intelligence work, police found that the syndicate had been in operations since last month and the distribution of the illicit drugs was for local and overseas markets.

“Based on our observation over the past two months, the syndicate is still in the early stage of operations and based on the tools confiscated we believe that the laboratory is still in the initial stage. The drugs confiscated are in powder form and also cube-shaped. The cube-shaped drugs are normally for overseas market while the powder form is for the local market.

“The case is still developing and investigations are ongoing. If there are more, we will carry out follow-up arrests. The mastermind is still on the loose and there are four whom we have already identified and there will be further arrests. They are still in the early stages and we will strike them before they have the chance to operate,” he said.

Ayob added one of the 10 individuals arrested has been remanded for seven days beginning yesterday and will end next Wednesday. The individual is investigated under Section 39B of the Dangerous Drugs Act 1952 which carries the mandatory death sentence or life imprisonment and whipping while the remaining nine will be investigated under the Dangerous Drugs Act (Special Preventive Measures) 1985.- Bernama

1.Are we safe? Killing of UK lawmaker makes colleagues nervous