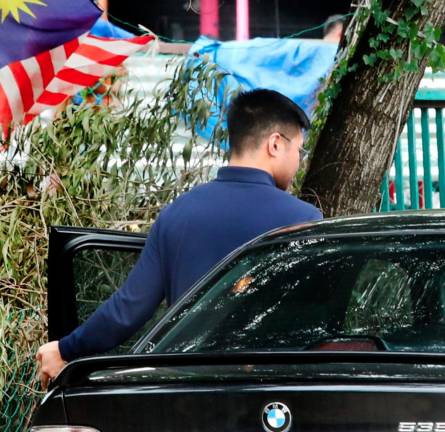 Haziq seen leaving the Kelana Jaya police station after lodging a police report on June 13, 2019. He was accompanied by his lawyer. — Sunpix by Masry Che Ani

PETALING JAYA: Police have detained Haziq Abdullah Abdul Aziz, who is linked to a lewd viral video along with an alleged federal minister, at Sepang.

Sources told theSun that the former private secretary of Deputy Primary Industries Minister Datuk Seri Shamsul Iskandar Mohd Akin, who is under suspension, was picked up by authorities at 5.30pm when Haziq was in his way to Kuala Lumpur International Airport (KLIA).

Haziq had publicly confessed that he and Economic Affairs Minister Datuk Seri Mohamad Azmin Ali were the two men in the lewd video that had been widely spread on social media.

So far, Azmin has strongly denied the sexual accusations and called the situation a nefarious plot to assassinate his reputation and character, in an attempt to destroy his political career.

Yesterday, Haziq lodged a police report in Kelana Jaya, saying he feared for his safety.

Simpang Pulai-Blue Valley road to be reopended when totally safe

1.Simpang Pulai-Blue Valley road to be reopended when totally safe

4.Non-Muslim houses of worship in Pahang can seek funding