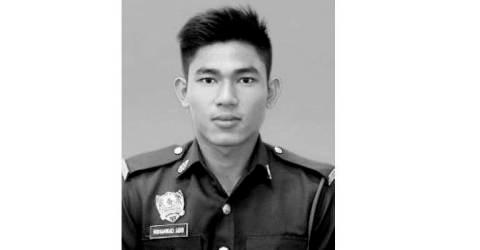 KUALA LUMPUR: The investigation paper (IP) on the death of firefighter Muhammad Adib Mohd Kassim (pix) had been referred back to the Attorney-General’s Chambers on July 23 along with several suggestions, the Dewan Rakyat was told today.

Home Minister Datuk Seri Hamzah Zainudin said the IP, among other things, suggested for 12 suspects who were previously believed of being involved in Adib’s death on Dec 17, 2018, to be charged under Section 143 of the Penal Code.

He said another proposal was to reopen the inquest if agreed by the Attorney-General.

“It will be done in accordance with the provisions of Section 339 (2) of the Criminal Procedure Code and this action follows the ruling by the Shah Alam Coroner’s Court on Sept 27.

“The court decided that the cause of Adib’s death was not due to an accident but a criminal act by two or more suspects,“ he said when winding up the debate on the motion of thanks for the Yang di-Pertuan Agong’s royal address for his ministry

Hamzah said based on the ruling, the police conducted further investigations under the orders of the Attorney General’s Chambers and collected the available evidence to be resubmitted to the prosecution.

Muhammad Adib, 24, who was a member of the Emergency Medical Rescue Services unit from the Subang Jaya Fire and Rescue Station, sustained serious injuries during a commotion at the Sri Maha Mariamman Temple in USJ 25, Subang Jaya on Nov 27, 2018. He died on Dec 17, after 21 days at the National Heart Institute.

On Sept 27 last year, the Shah Alam Coroner’s Court ruled that the fireman’s death was the result of a crime committed by more than two or more unknown persons. — Bernama 4.Jill Biden says US to increase funding to fight HIV/AIDS in Latin America