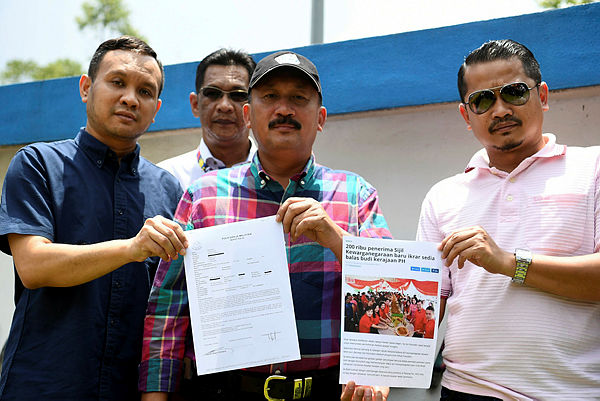 NRD Director Datuk Ruslin Jusoh showing the police report made today on the social media user who made posts titled “200,000 new recipients of citizenship vow to repay the government”, at the Putrajaya District Police Headquarters. — Bernama

KUALA LUMPUR: The owner of fake Facebook and Twitter accounts under the name of ‘’TengkuRajaAlamShah’’ has been urged to come forward to facilitate the investigation into the allegations that 200,000 people have been granted new citizenship.

He said the case was being investigated under Section 500 of the Penal Code for defamation as well as under the Communications and Multimedia Act 1998.

“The statements made are found to be defamatory against the NRD DG.

“Upon investigation, we found that the two accounts are fake and we are tracking down the suspect,” he told a press conference at the Bukit Aman here today.

On Saturday, the Home Ministry denied the allegations posted by the owner of Twitter account @TengkuRajaAlamShah claiming that 200,000 people have been granted new citizenship and pledged to repay the good deeds of the Pakatan Harapan government.

Home Ministry said the allegations were false and asked the owner of the Twitter account to come forward to prove the validity the claims. — Bernama