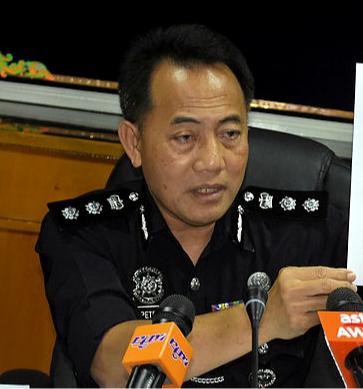 Tawau district police chief ACP Peter Umbuas (pix) said they have received a public complaint about the video and the investigation was underway.

“The video has been handed over to the forensic department for further investigation to determine its authenticity,” he said at a press conference here today.

He said people who were found to be disseminating the sex video could face legal action under Section 233 (1) (a) of the Multimedia Communications Act 1998 which provides for a fine not exceeding RM50,000 or imprisonment for a term not exceeding one year or both and shall also be liable to a further fine of RM1,000 for every day or part of the day during the which the offence is continued after conviction.

“For having possession of a pornographic video, the public can be charged under Section 292 of the Penal Code which provides for a maximum jail term of three years or a fine or both, if convicted,” he said.

He also hoped that the public would not disturb the witnesses including the victim as well as the suspects as all the accused were sitting for the SPM examinations.

“At the same time, the police have also worked with relevant parties including the Social Welfare Department (SWD) to assist the victim who is said to be a smart student which include the placement of new school suitable for her,” he said.

Asked if the victim had been promised a smartphone by the suspects if they had sex, Peter said he had not received such information.

All the suspects were detained and remanded until Nov 18 before being released on police bail to enable them to sit for SPM examinations. — Bernama Over 1,800 cases of digital sex crime reported from schools in South Korea over past 5 years Over 1,800 cases of digital sex crime reported from schools in South Korea over past 5 years

3.Over 1,800 cases of digital sex crime reported from schools in South Korea over past 5 years