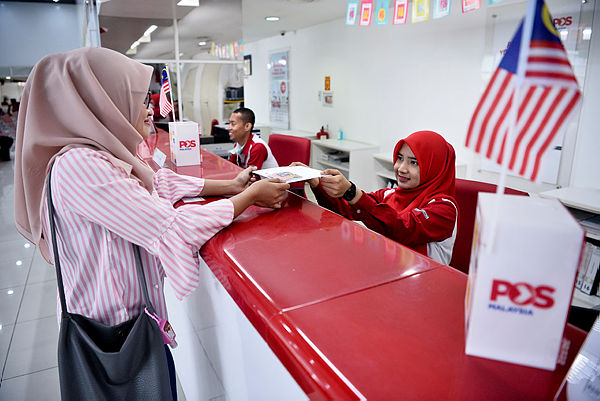 KUALA LUMPUR: Pos Malaysia Bhd (Pos Malaysia) is gearing up for transformation and has set its sights on the booming digital economy.

“Digitalisation is the way forward for Pos Malaysia to transform the existing postal system, which necessitates business adaptability to remain relevant in the industry as the world is moving towards Industrial Revolution 4.0,” he said in a statement.

Pos Malaysia according to him, has allocated over RM300 million in coming years for the digitalisation of its core system, including the track-and-trace system, retail, mobile application and other improvements across its business chain to drive efficiency and service quality.

The new core system is expected to be fully operational by mid-2020, with supporting sub-systems to follow, he said.

The company has also conducted a soft launch of its cashless payment initiative by enabling selected Pos Automated Machines (PAM) to accept bill settlement via the Touch ’n Go, Boost and Maybank QRPay e-wallets for eight to 30 billers/agencies.

The move, which will be expanded in the near term to include all Pos Malaysia channels including post office counters, the website and mobile application, is in line with the country’s aspiration towards a cashless society.

“We remain confident as we see the unprecedented opportunities brought upon by the changing landscape and the untapped potential in the strength of our people, as well as our wide network reach, which we will use to transform the postal service of Malaysia and emerge to be more competitive than ever,” said Syed Md Najib.

Pos Malaysia, in a statement on Jan 28, announced that it would implement a commercial postage rates review effective Feb 1, but the move will not affect individual mail users.

It will continue to provide affordable postage rates for personal and non-commercial mail users at the current domestic stamp rate of 60 sen.

The move said the company, is in tandem with the rising operation costs and the increase in the international rate structure by the Universal Postal Union (UPU), which has changed the global postal landscape and prompted Pos Malaysia to transform the postal system for greater efficiency.

According to Pos Malaysia’s website, commercial stamp rate will be increased by 70 sen to RM1.30 while the rate for commercial registered mail will be up 90 sen to RM3.10.

“The price revision is only within the commercial postage category, whereby the domestic stamp rate for commercial mail has seen an increase from RM0.60 to RM1.30,” said its group CEO, Datuk Noor Kamarul Anuar Nuruddin.

Various Pos Malaysia’s clients he said, have expressed support towards the new postage rates and TM has opted to stand with its fellow corporations in maintaining its cost to customers.

CIMB Group group wholesale banking CEO Shahnaz Jammal said the bank is confident that Pos Malaysia will become a key e-commerce centre in Malaysia and contribute towards further growth of the sector.

“E-commerce is set to boost the Malaysian digital economy further and Pos Malaysia will be key to ensure a fast-paced and seamless web-based retail ecosystem,” he said. — Bernama