Premature to write off newspaper industry 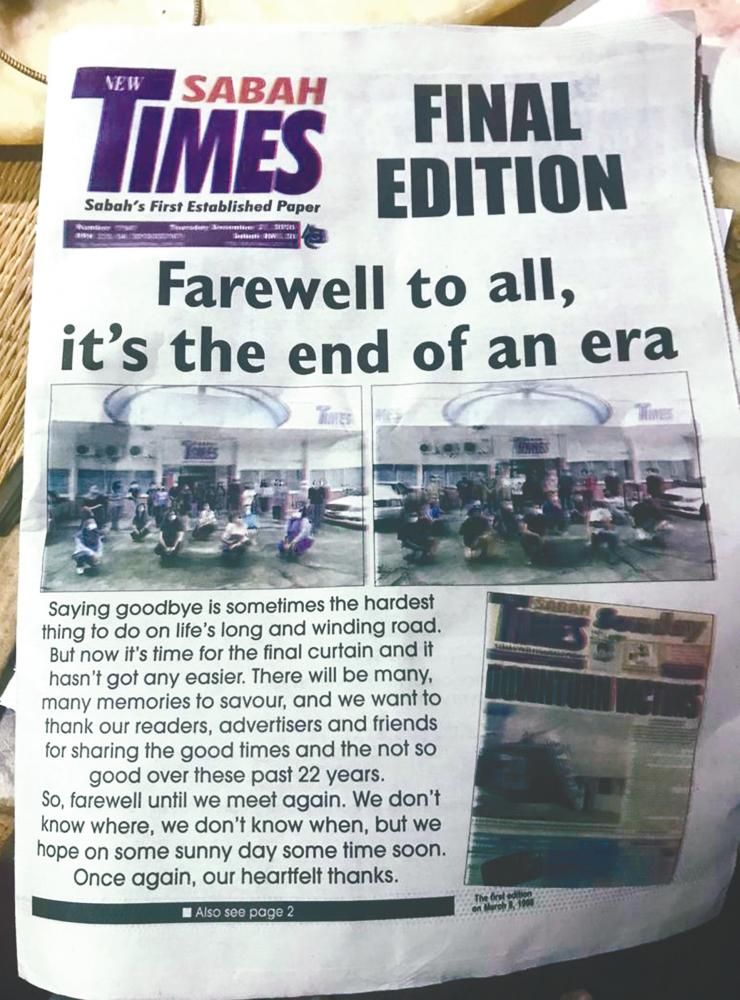 PETALING JAYA: The obituary has already been written and published for many newspapers. Two Malaysian newspapers that have stopped rolling off the presses are the English daily New Sabah Times and business daily The Edge Financial Daily.

Those that still make it to the news-stands every morning are seeing their circulation dropping by the day as traditional readers pass on while many younger readers prefer social media for their news consumption.

The Covid-19 pandemic has only made things worse. Advertising revenue, the bread and butter of every newspaper, has hit
rock bottom.

However, media experts say, it is still premature to write off newspapers for good. For instance, it has been pointed out, the circulation of newspapers took a dent when television was first introduced in the late 1920s.

Yet, the medium survived. But today, it faces a bigger threat – online media. Even so, many believe print will survive the latest onslaught but to do that, it has to evolve into a new form.

For a start, the government can help newspapers survive by offering tax incentives and short-term loans, the Centre for Independent Journalism said.

However, she said, these measures should remain as short-term lest people start questioning the independence and credibility of such publications.

“Worse still, they may end up as tools for the government to exert greater control over the media, subjecting newspapers to censorship and using them to promote propaganda.”

In the long term, and to ensure media freedom continues to be respected and upheld, she said other ways to make newspapers financially independent must be found.

A proposal by the Malaysian Newspaper Publishers Association that should be considered is to get multinational technology companies such as Google and Facebook to share advertising revenue generated through content from local media outlets.

In December last year, the Australian Parliament tabled the world’s first legislation to that end.

Another media expert who is not writing off the print media is Adlene Aris, a lecturer at the Faculty of Applied Communications at Multimedia University in Cyberjaya.

She pointed out that while millennials and Gen Z prefer to get breaking news through social media platforms like Twitter and Facebook, many turn to main news portals and newspapers for confirmation.

“In a way, the print media is still relevant because it is deemed more credible (than social media),” Adlene said, adding that the disadvantage faced by social media is the fact that irresponsible and media illiterate cyber citizens often misuse it for parodies of credible news sources.

One example, she said, is the fake Twitter account attributed to Bernama, which was mistaken for the national news agency’s official account. Adlene added while it is good to also have news portals, they are open to abuse by irresponsible parties.

Unlike traditional newspapers, content on social media come with news and feedback from readers. “This is good in the sense that readers’ views about an article are not shaped solely by the journalist who wrote the story.”

She blamed the political crisis in the past year for the decline in newspaper readership. “Most people look for alternative news sources to get what they think are fair, just and realistic reports,” she said. “This is justifiable.”

Regardless, Adlene pointed out, the print media has taken the challenge head on by reshaping their content to keep up with readers’ demands and popular trends. “For instance, broadsheet newspapers have given way to the more manageable tabloid size newspapers.”

Most newspapers now also have an online presence, and to raise revenue, readers are charged through a pay wall.

To the diehard newspaper reader, rest assured that your copy of tomorrow’s issue will be at your doorstep.