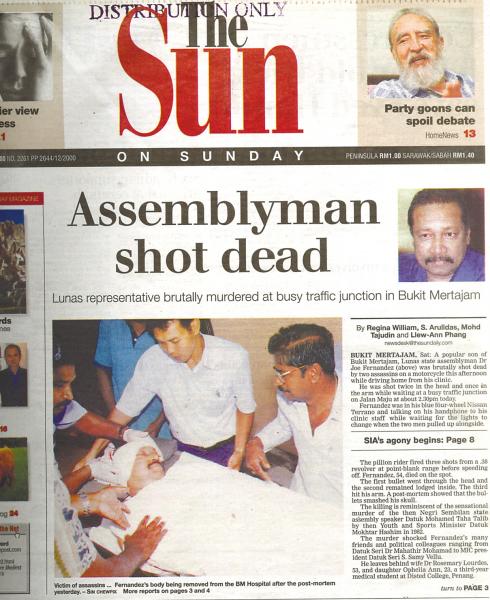 Our front page report on the assassination on Nov 5, 2000.

WHEN Dr Joe Fernandez left his clinic and drove home for lunch on the afternoon of Nov 4, 2000, it was another routine drive for the former Lunas assemblyman and medical practitioner.

But when gunshots rang out in the then sleepy town of Bukit Mertajam, it was a murder that shocked the nation. Never before had a senior politician been gunned down in broad daylight.

A few minutes into the journey in his Nissan sports utility vehicle, Fernandez was caught in a traffic jam not far from his clinic.

Little did the senior MIC member, who owned a chain of clinics, know that he was being trailed by two assassins who would put an end to his life and illustrious career as a politician and doctor.

Moments later, a motorcyclist and his pillion rider pulled over next to the driver’s side of Fernandez’s car before firing several shots.

As the bikers fled the scene, Fernandez, who suffered gunshots to his head, lay slumped in his seat unconscious.

He was pronounced dead an hour later at the hospital he was being treated.

Subsequently, police ruled out robbery as the likely cause and the case went cold for almost two years.

However, fresh evidence emerged following the arrest of several suspects in connection to an armed robbery at a bank in Petaling Jaya on May 18, 2001.

Ballistic tests revealed the firearm used in the robbery by the suspects matched the same weapon that was used to kill Fernandez.

Police investigators uncovered more damning details when they learnt that the suspects were members of a local Muslim militant group called Kumpulan Mujahiddin Malaysia (KMM) and Fernandez was murdered over an unsubstantiated claim and rumour that he aided in the proselytisation of Muslims.

A suspect had also confessed that he plotted to kill Fernandez with two other fellow KMM members.

In April 2008, a coroner’s court in Bukit Mertajam delivered an open verdict and ruled that Fernandez’s murder was not connected to politics, business rivalry or personal relationships and that police should continue pursuing investigations into the case.