Reminisces of the father of Tsunami’s miracle baby 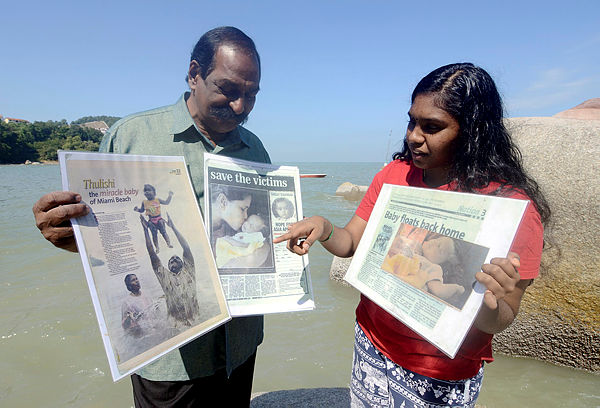 GEORGE TOWN: Today’s date will always be remembered not only by the people in Malaysia, but also by those in countries that were hit by the 2004 tsunami such as Indonesia, Thailand and India, which claimed the lives of hundreds of thousands of people.

In Penang, the tsunami will remain etched in the minds of businessman A. Suppiah, who almost lost his daughter, S. Thulaasi, then 22 days old.

It was a miracle that Thulaasi survived the ordeal. The huge waves that hit Miami Beach in Batu Ferringhi, on Boxing Day in 2004 also smashed into Suppiah’s shop house and then swept out a mattress with a sleeping baby on it into the sea.

Luckily, the second wave brought the mattress and the baby back to the beach.

Recalling the incident, Suppiah, 70, said he could never forget it.

“In an instant, the situation became chaotic with people shouting and screaming. Prior to that, a foreigner came to me and asked what the two white lines or bubble he saw approaching towards the beach. I had no answer to it, but told him that December is a month of festival in Penang, where there would be a boat race, but he said it was not it (boat race), that something was wrong.

“And then, the sea level rose and everybody went running helter skelter. So did I, to save my 12-year-old daughter and Thulaasi, but I could not get to them in time as I was swept by the force of the current and was able to cling to a pole,” said Suppiah when met by Bernama recently.

Suppiah said his wife and Thulaasi were in a room in the shop when the tsunami struck.

“After that I went to search for my baby, but failed to find her, until an Indonesian man came to me and told me that my baby was found safe on a mattress,” he added.

Thulaasi, then made headlines all over the world as “the miracle baby who floats home”.

Recollecting the ordeal, Suppiah said he was initially angry having lost his belongings in the tsunami, but after reading in the newspapers on the extent of the damage and loss of lives caused by it, while his family was safe, the feeling of remorse seeped in.

“It’s normal for us, humans, to feel angry at first, especially when I looked at my shop with everything destroyed, but after reading about the tsunami in Sri Lanka, Acheh, Thailand that killed so many people .. and my family and I survived in the incident, it made me feel grateful and made me seek pardon from God,” he added.

Meanwhile, Thulaasi said she was grateful that God saved her in the tragedy.

“I was told about the tsunami by my father when I was about four or five years old. How grateful I am to be alive and always thank God during my prayer,” said Thulaasi, who is now 15-years-old.

The tsunami, which was triggered by a 9.3 magnitude undersea earthquake off the west coast of Sumatra, Indonesia, on Dec 26, 2004, claimed more than 200,000 casualties in Indonesia, Malaysia, Thailand, India, Maldives and Sri Lanka.

Many of those killed were tourists enjoying their Christmas holidays in hot spots like Phuket in Thailand, while Aceh was hit the hardest as it was the closest to the epicentre.

In Malaysia, Penang was the hardest hit with 52 deaths, from a total of 68 deaths nationwide. — Bernama

1.Community leaders should equip themselves with information delivery skills

2.MACC arrests GLC executive, two others for misuse of power

5.All parties must comply with campaign restrictions for sake of public safety — Melaka CM