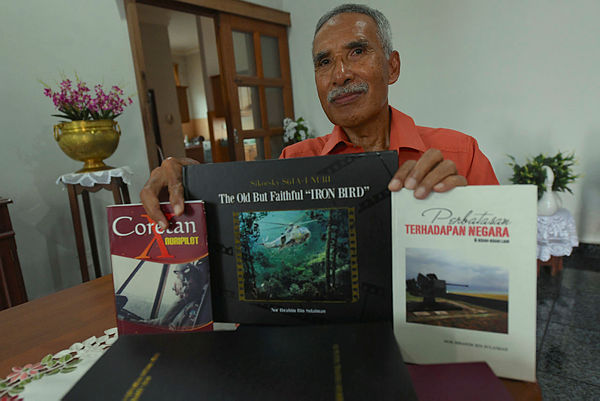 ALOR SETAR: For about 39 years beginning 1968, the Nuri helicopter flew the Malaysia sky until its services were stopped following numerous accidents which killed many crew members of the Royal Malaysian Air Force (RMAF).

Today, if anyone wants to know more about the Nuri and its role in the RMAF, none would be a better source than Major (Rtd) Dr Nor Ibrahim Sulaiman (pix).

Beginning his career as a helicopter pilot with the RMAF in 1973, Nor Ibrahim, now 70, is considered an authority on the Nuri, also known as Sikorsky S-61, a multi-purpose twin-engine helicopter

His career saw him being involved in operations against communist terrorists before he retired in 1992, but he is better known for his interest in the Nuri which has spurred him to study and write about the aircraft for public consumption

Now retired, his love story with the Nuri saw him completing a thesis titled “The role of the Nuri during the era of the insurgency in Peninsular Malaysia 1968-1989”, earning him a doctorate degree at the age of 69.

Nor Ibrahim said it was not easy for a grandfather like himself to carry out research and collect data in the modern era with all its sophisticated systems and applications.

“But I wanted to do the research on the Nuri because I feel it has played a very big role and was the pulse in the armed forces, connecting and saving the lives of our personnel in the fight against our enemies.

“That was why despite my age, I was willing to struggle to complete my PhD on the Nuri. I am proud to have completed it, I want the Nuri to be respected, and I hope that my thesis will be a reference for others who want to know more about the Nuri,” he told Bernama here.

Over the years, the Nuri was involved in 15 accidents, killing 89 personnel, and its services were finally discontinued and it was replaced by more modern helicopters.

Nor Ibrahim said it was sad that Nuri is no longer considered relevant, and has been replaced with more modern versions which are in keeping with the times.

He has written stories of the Nuri and his experiences with it in his books ‘The Old But Faithful ‘Iron Bird’, and “Coretan X Nuri Pilot” and “Perbatasan Terhadapan Negara” as well as in his blog “Jottings of an Xnuripilot”.

He has also shared his views and comments on military issues in local magazines and newspapers.

“I want to share my stories not just on the Nuri, but also about the insurgency period. I am now in the process of publishing my writings on the Baling talks (between the government and the communist) and that will be interesting reading.

“I welcome anyone, especially the younger generation who want to know more about these things to come see me, we can talk about it,” he said. — Bernama