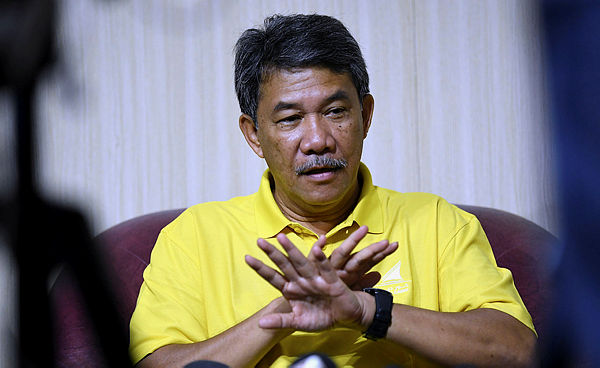 BN candidate for the Rantau by-election Datuk Seri Mohamad Hasan speaks to members of the media on April 7, 2019. — Bernama

SEREMBAN: Former Negri Sembilan mentri besar Datuk Seri Mohamad Hasan today said that the RM10 million he remitted through a money changer a decade ago was for the purchase of an apartment in London.

The Barisan Nasional (BN) candidate for the Rantau by-election denied that he was involved in any wrongdoing and that the case was investigated by the Malaysian Anti-Corruption Commission (MACC).

Speaking at a press conference here, the Umno deputy president, who is also discharging the duties of party president, said he welcomed any fresh investigation into the case by the authorities.

At a campaign rally in conjunction with the by-election at Taman Kelab Tunku here last night, Negri Sembilan State Assembly Speaker Datuk Zulkefly Mohamad Omar had questioned why no action was taken against him for transferring such a “humongous” amount of money through a money changer.

In the 14th general election last May, the federal government and the Negri Sembilan government, which were both under the BN rule since independence in 1957, fell to the opposition Pakatan Harapan coalition, believed to be largely due to public perception that BN and Umno leaders were acting with impunity.