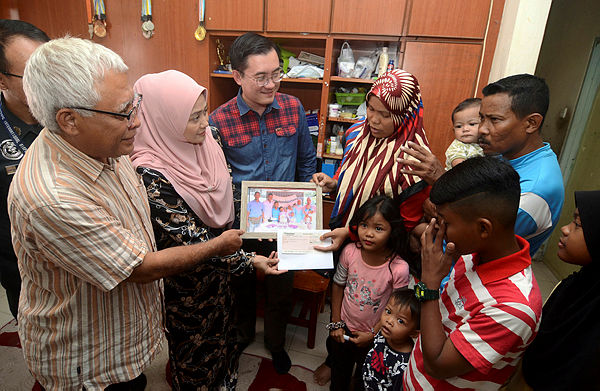 GEORGE TOWN: A pro-safety group, Safety First today presented a contribution amounting to RM8,300 to the family of Form Four student, Muhammad Saifullah Muhammad Hafeiz who was killed at a traffic light junction in Setia Triangle in Bayan Lepas near here on Nov 6.

Safety First founder, Samad Rahim said the contribution was collected from members of the group to lighten the family’s burden as well as the appreciation of the group on the effort of the victim, Muhammad Saifullah, 16, who was working as a fast food restaurant deliveryman to help supplement his family’s income when he was killed.

“We know the assistance cannot bring him back to the family but we hope it would help ease the pain of the family over the loss of their eldest son,” he told reporters at the family’s house in Sungai Ara near here today.

He was met after presenting the contribution to the victim’s parents, Muhammad Hafiez Mubara, 44 and Siti Hajar Ghazali, 38.

In the 6.30 pm incident, a tour bus driven by a man crashed into four vehicles at the traffic light junction which caused the death of motorcyclist Muhammad Saifullah.

Safety First is a group which disseminates information on road safety through the use of Whatsapp application, now has access to more than 5,200 individuals including from abroad and expects the number to increase soon.

Samad Rahim also called on parents to be more aware of their children’s safety and monitor their movements so that they did not get involved in dangerous activities such as riding modified bicycles (basikal lajak).

He said parents should know the whereabouts of their children especially in the wee hours and not to leave monitoring them to the authorities.

“We are a group which promotes road safety and as the problem of riding modified bicycles among youngsters is getting more serious and we hope parents would keep a keener eye on their children.

“Our children’s safety cannot be left to others (authorities) and as parents, we do not want any untoward incidents to befall our children before it is too late,” he said. — Bernama