‘Sarawak can demand from Petronas’ 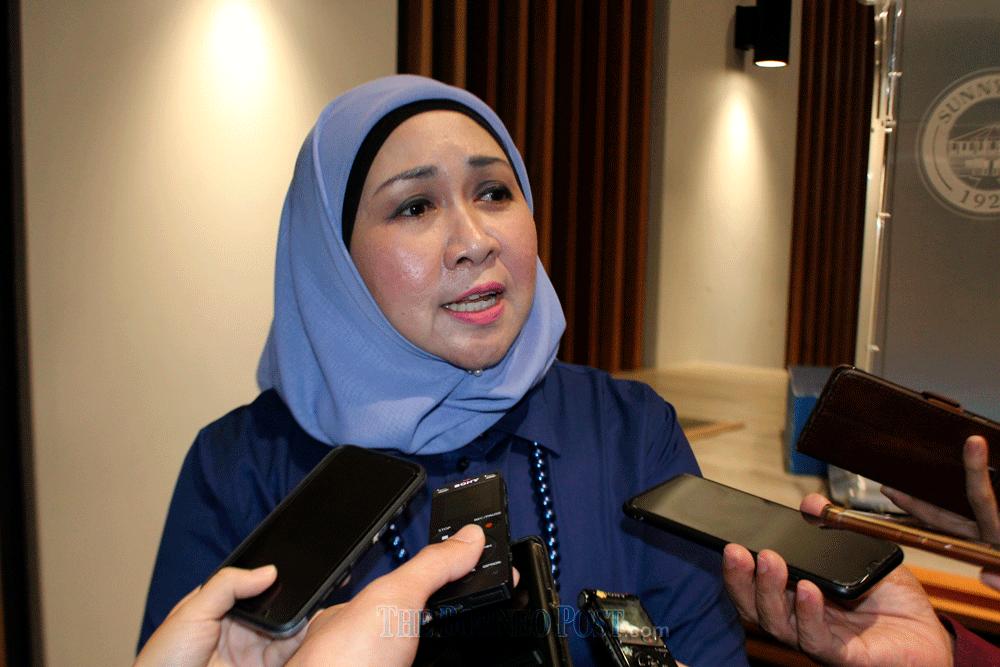 KUCHING: Sarawak has contributed immensely to the success of Petroliam National Bhd (Petronas) over the years and thus, it is only fair for the national petroleum corporation to pay the state-imposed 5% sales tax.

In pointing this out, Assistant Minister in Chief Minister’s Department (Law, State-Federal Relations and Project Monitoring) Datuk Sharifah Hasidah Sayeed Aman Ghazali (pix) views Petronas’ reluctance in paying the tax – amounting to RM1.2 billion for the period between January and June this year – as the reason why the state government filing a suit against the company on Nov 21 this year.

“From the statistics, it’s very clear we, Sarawak, contribute hugely to the success of Petronas and therefore, I think all of us agree that the time has come for us to get a little bit of that back to the state – if not more,” she spoke during a public talk on ‘Talking About What Really Matters’, which took place at the Chemsain auditorium along Jalan Rock here on Friday night.

“In fact, what we have actually gathered from industry players is that there is no drop of sales in LNG (liquefied natural gas) or crude oil since we introduced the SST (State Sales Tax). There is no such thing,” she stressed, adding that other oil and gas giants, Shell and Murphy Oil, had already paid up the tax.

According to her, now both parties – the Sarawak government and Petronas – are in the midst of exchanging documents, while waiting for the court to decide the date for case hearing.

In this respect, Sharifah Hasidah said she had faith in the Malaysian judiciary system.

“I believe the court would be independent and I believe in the independence of the judiciary; I believe the rule of laws will be upheld. I will leave it to the judges to interpret the laws as it is and as far as we are concerned, we are not breaching any law,” she told reporters here after the talk.

Sharifah Hasidah said Petronas recently made a proposal to the Sarawak government, through Putrajaya, to offer a three per cent ex-gratia payment that would be equivalent to between RM2 billion and RM3 billion, to Sarawak – given that all demands from the state government such as the enforcement of the Oil Mining Ordinance 1958, or even the SST, be dropped.

In response, Chief Minister Datuk Patinggi Abang Johari Tun Openg made a counter-offer to the federal government, stating that it was the state’s constitutional rights to impose SST on petroleum-related products, and that demands from Petronas ‘would not be entertained’.

“Zero-rated SST, as proposed by Petronas and the federal government cannot be considered by us – no way can we consider that,” she stressed.

However, Sharifah Hasidah said the Sarawak government would only be prepared to reduce the SST rate, provided that the federal government or Petronas would compensate for any shortfall in the collected amount.

Citing data from a world-renowned oil and gas consultant, Sharifah Hasidah said Sarawak had contributed 60%-65% of the country’s gas production, and 30% out of total oil production between 2005 and 2015.

Again citing data from the Malaysia Statistics Department’s Report, Sharifah Hasidah said the volume of LNG production exported from Sarawak in 2017 was 27 million metric tonnes amounting to RM41.1 billion, and accumulative of total revenue of over RM660 billion.

The LNG production, however, had been generated between 1976 and 2017, throughout which Sarawak only received RM33 billion in return.

For overall amount of crude petroleum exported from Sarawak in 2017, it was recorded at 3.353 million metric tonnes, worth about RM9.4 billion.

As at December 2017, Petronas had 41 production sharing contracts (PSCs) – all these blocks of PSCs were found to be located within the offshores of Miri and Bintulu.

“Can you imagine if all these 41 (PSCs) you can regulate, how much income can we generate?” questioned Sharifah Hasidah.

On Prime Minister Tun Dr Mahathir Mohamad’s proposal to sell stakes in Petronas to oil-producing states including Sarawak and Sabah, Sharifah Hasidah believed that the people should not be overly excited with such news, as there was nothing concrete yet about this offer.

“Well, if they (Putrajaya) want to give us (stakes in Petronas), I think they can give us 51% of the shares for free,” she quipped, but was quick to add that Sarawak should not have to pay for the resources found within its boundaries. — TheBorneoPost