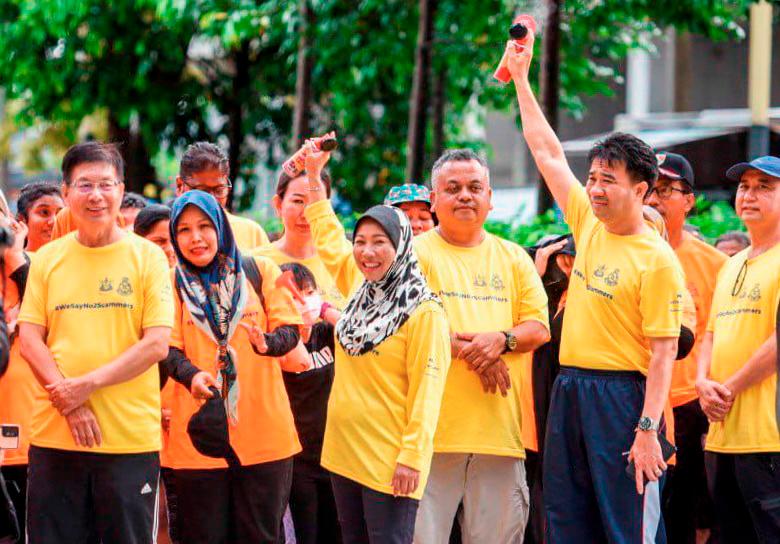 Cha sounding the buzzer to start off the walk.

KLANG: South Klang police have warned residents to beware of scammers on the prowl in cyberspace after some 1,300 reports of job, parcel and love scams were received in the district between January and September this year.

“Just within South Klang district, reports of scams accounted for about RM80 million in losses. Scammers generally don’t pick or choose their victims. Therefore, it can happen to anyone regardless of race, age or gender. It is prudent for the public to know what to do to avoid being scammed.”

Cha said continuous community engagement programmes should be organised to spread information to the public about the different tactics and modus operandi of scammers, adding that this would prevent people from becoming victims.

“With the rising cost of living, job scams have become most common in South Klang. A victim receives a link via text or WhatsApp message about a vacancy that offers a very attractive salary. Once the victim clicks on the link, the scammer proceeds to retrieve private information through it, including bank (account) passwords and personal details.”

The “Say No to Scammer Walk”, which was jointly organised by the Mitraland Group, Klang Municipal Council and South Klang district police, saw some 300 people taking part.

Council president Noraini Roslan said the event was part of a more significant programme to make Klang a safe city.

“Scamming activities are becoming increasingly common and even more rampant in the district compared with theft and burglary. Therefore, we have to act to educate residents about it.

“While the numbers may not be as high as in other places, the fact that Klang has a population of about one million (means) we need to take proactive steps to remind them not to inadvertently become victims,” she said.

Noraini said the council would continue working with different agencies to increase awareness and spread information about scams to different parts of Klang, especially when the initiatives align with police campaigns to fight scammers.

She advised the public not to be pressured to provide personal information to strangers, and to always check the phone number they are calling from.

“The timing of the call makes a difference, especially from alleged government agencies that have normal operation hours,” she said.

During a briefing about scams held for participants and guests at the event, South Klang police Commercial Crime Investigation Department representative Insp Norizan Dollah told victims to lodge a report if their private information, such as identification card numbers and bank details were shared with scammers.

“Reports of potential scams, even though no losses were recorded, will allow us to gather information and include it in our database of scammers. It will also help prevent bank accounts from becoming mule accounts.

“The police report will act as a cover, which will help tremendously if victims’ bank accounts are used as mule accounts and from that point on, the police will investigate it under Section 424 of the Penal Code,” she said.

Mitraland Group deputy executive chairman Chuah Theong Yee said the company was glad to be part of the event.

“Knowledge is power, and we do what we can to equip the public so they can spread what they learn to others as well.”