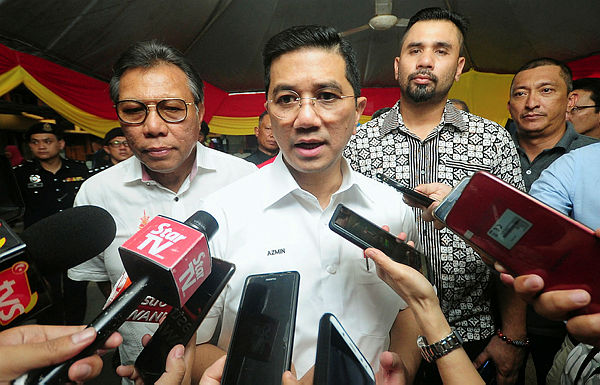 KLANG: The people should make full use of the initiatives spelt out in the 2020 Budget, said Economic Affairs Minister Datuk Seri Mohamed Azmin Ali.

He said the government initiatives would be successful only if the people accepted them and play their part.

“These three are key to making Malaysia a developed country,” he told reporters here after presenting his ministry’s allocations totalling RM1.79 million to 10 schools for infrastructure repair projects.

Azmin also said a RM6.5 billion allocation under the budget to create job opportunities, especially for women and graduates, could boost the country’s economy.

“The youth and women groups are very important for expanding the country’s economy and we want them to be prepared in facing the Industrial Revolution 4.0,“ he added.

In SEREMBAN, Negeri Sembilan Mentri Besar Datuk Seri Aminuddin Harun said the higher allocations of RM10.9 billion under the 2020 Budget for rural development would improve the well-being of the rural people.

Rural areas should be given attention, with priority for social and infrastructure development, he told reporters after the graduation ceremony of Sekolah Menengah Dato’ Klana Petra Maamor. — Bernama

73.7 Per cent of PwD in Kelantan fully vaccinated

1.73.7 Per cent of PwD in Kelantan fully vaccinated