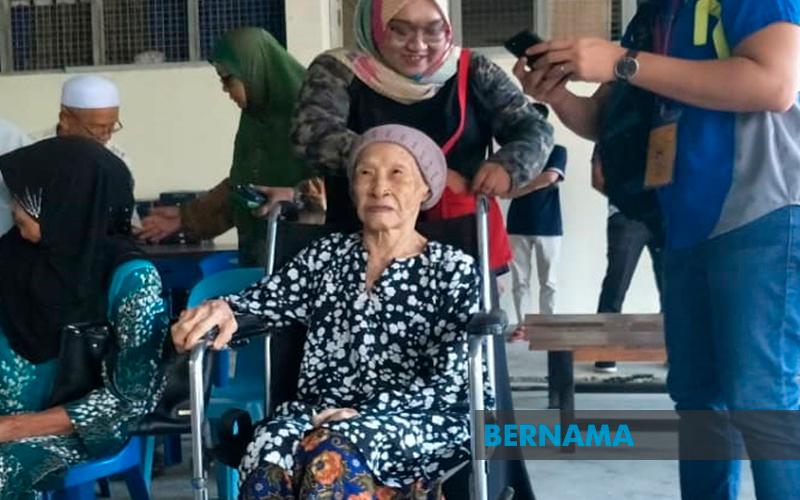 PONTIAN: Despite being wheelchair-bound, Aminah Kasbi, who will be celebrating her 90th birthday, is highly spirited to go to the polls and fulfill her responsibility as a voter in the Tanjung Piai parliamentary by-election.

Since she became a registered voter, Aminah said she had never missed going to the polls to exercise her right.

For this by-election, Aminah, from Taman Sri Pulai, went to the polls with her grand-daughter, Norhidayah Abdullah, 30, and arrived at the polling centre at Sekolah Kebangsaan (SK) Telok Kerang even before it opened.

“My grandmother woke up as early as 4am today She is always excited during election to go to the polls. She said it’s her responsibility as a citizen to exercise her right,” said Norhidayah.

A retiree, Mohd Taib Ahmad, 67, said he too had never missed going to the polls during elections.

“Although I’m not that well, I still want to exercise my right because I want the person that I voted for to help me and other people in Tanjung Piai by making our life better,” said the voter, who is from Telok Kerang.

The Tanjung Piai by-election is the ninth since the last general election in May last year. It is called following the death of its incumbent MP Datuk Dr Md Farid Md Rafik last Sept 21 due to heart complications.

Last Tuesday, 91% of the 280 early voters, comprising police personnel, had cast their votes at the Perkep building of the Pontian district police headquarters.

A total of 27 polling centres, involving 125 streams, are now open until 5.30 pm today for voters in Tanjung Piai to vote for their new elected representative.

Another senior citizen, Mohammad Noh Osman, 63, who was seen limping to the polling centre at Sekolah Kebangsaan Pengkalan Raja attracted the attention of other voters.

The caretaker of a surau at Warisan Batu 29, Pengkalan Raja, was in a special outfit made from the national flag.

“My foot is aching, that is why I’m limping and I came early to vote to avoid the crowd, as well as hoping to be among the early voters to cast my vote.

“I have never missed discharging my responsibility as a voter because I love my country. It is a responsibility which all Malaysians should do for the country’s future,” he said.

As for his national flag attire, Mohammad Noh said he would wear it everytime when there is a programme that concerns the country. — Bernama 1.Vietnam says not in deal with Thailand to raise rice prices