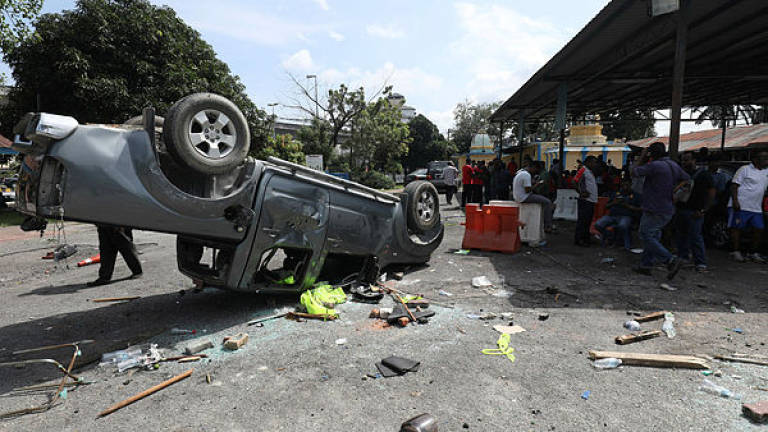 PETALING JAYA: Police have arrested seven men suspected to be involved in a violent clash between a group of thugs and devotees of the controversial Sri Maha Mariamman Devasthanam Seafield Hindu temple in USJ 25, Subang Jaya here this morning.

Selangor police chief Comm Datuk Mazlan Mansor said the suspects are being held for further investigations and police are looking for more people who were involved in the attack.

“We expect to make more arrests and those behind this commotion will be severely dealt with in accordance with the law. Police personnel will be stationed at the temple vicinity round-the-clock to to ensure public safety is not breached. I wish to remind the public that this commotion was not racially motivated.” he said when contacted.

It is learnt that two of those held are warded at a hospital for injuries they sustained during the commotion.

Past noon today, calm prevailed at the temple but the place was a hive of activity with devotees and supporters thronging the temple since the melee was brought under control at about 5am.

At 2pm, Subang Jaya police chief ACP Azlin Sadari said police will keep a watchful eye on the place and Hindu devotees can resume their prayers at the temple.

Sources said preliminary police investigations revealed that the assailants who encroached the temple premises were made up of about 150 men from Kajang, Cheras and Ampang.

It is believed that the assailants who are in their 20’s and 30’s belonged to turf gangs in their respective areas.

It is learnt that the men who came in cars and motorcycles had gathered at a restaurant not far from the temple prior to the attack at 2.30am.

They were apparently briefed on their roles by those who led the mob and were promised RM300 each if they managed to take full control of the temple and ensured a planned demolition of the structure takes place smoothly.

The men managed to gain access into the temple and drove out a small group of devotees who were watching over the place.

However, when hundreds of other devotees and supporters began showing up after being alerted and confronted them, the assailants’ plan turned awry.

Over 20 cars and five motorcycles mostly belonging to the assailants were burned down during the incident.

Sources also said that the attackers had ransacked and damaged the temple priest’s room.

The priest reported that about RM2,000 which was contributions made by devotees over the weekend was also missing.

The assailants are also said to have beaten up elderly men and women who turned up during the clash.

Devotees also discovered that the statues of deities in the temple were not destroyed by the assailants as earlier reported.

It is also learnt that an assailant fled into a jungle next to the temple and went into hiding during the melee.

He only emerged out of the place at noon — exhausted and dehydrated and was promptly handed over to police by bystanders.

Apart from recovering sticks and other sharp weapons belonging to the assailants, supporters and temple devotees also found a red shirt with logos of a Pakatan Harapan party and a membership form of the political party in a car of a suspected attacker.

Police also recovered several papers that detailed plans to lay siege on the temple including the number of people, weapons and timing.

In a video taken by a devotee and shared in the social media, a badly injured attacker while being comforted by the temple devotees, revealed that he was offered to be part of the offensive by a man he only knew as “Viva” from KL.

“I only know that I was asked to come over and join them.” said the man who was lying on the ground with his face covered in blood.

In several other viral videos, supporters and devotees spoke out against the attack and reiterated that the incident was not a clash between two races but a move to intimidate temple members into moving out of the place.

“We would like to say this again and again. This is not a racial fight between the Malays and Indians. Please stop making such claims viral as they can cause disunity and unrest. This incident is linked to the temple land issue with the developer.” said an unidentified temple devotee in a footage.

In later developments today, police learnt that two gangs identified as Geng Selempang Merah and Geng Kucing Merah were responsible for the attack.

Sources said leaders of the gangs had called on their members to pull off a “job” in Subang Jaya but did not specify it was to lay siege on the temple.

It is learnt that the gang members had initially thought it involved several nightspots in USJ, Subang Jaya.

It was only after they arrived the area, did they learn it was about launching an attack on the Seafield temple.

Police also believe that among the attackers were also foreigners with permanent residence status.

In another video footage, an elderly woman believed to be a devotee was also seen unconscious on the ground surrounded by her weeping family at the temple premises. A group of about 10 attackers were also seen next to them creating chaos and shouting. It is unknown if the woman was assaulted or had fainted as a result of the hostile situation.