Shafee: No advocate in M’sia possess an equal degree of experience like UK Queen’s counsel 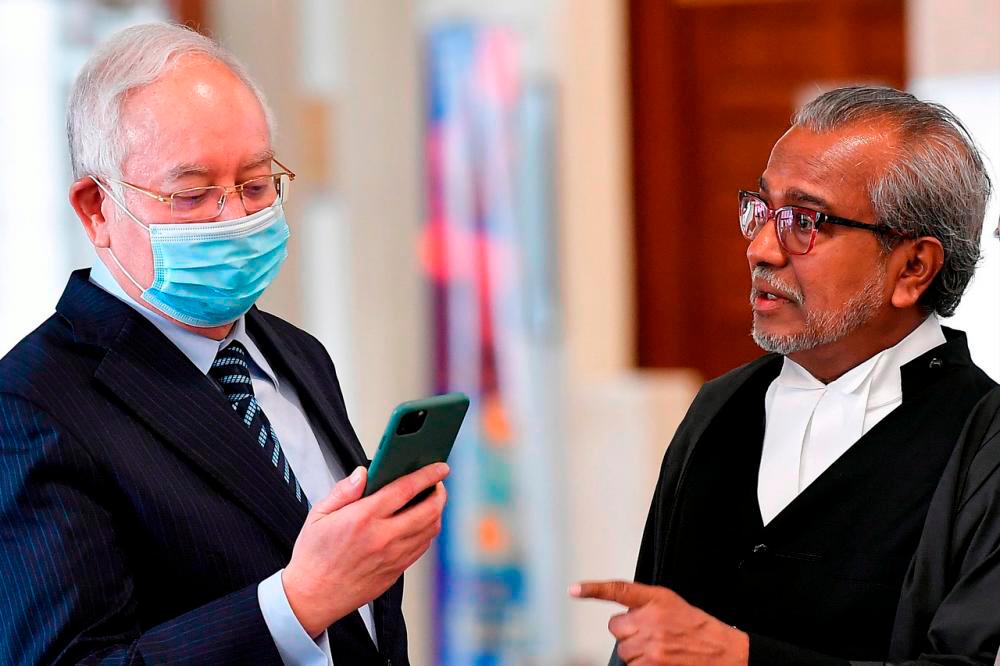 KUALA LUMPUR: A Queen’s Counsel (QC) from the United Kingdom, Jonathan Laidlaw, who is seeking to act for Datuk Seri Najib Tun Razak in the former premier’s appeal in the RM42 million SRC International Sdn Bhd corruption case, has special qualification and experience of a nature not available amongst advocates and solicitors in Malaysia, according to Najib’s legal team.

Najib’s lead counsel Tan Sri Muhammad Shafee Abdullah, in an affidavit to support a bid for Laidlaw to represent the appellant in his final appeal at the Federal Court in August, said Laidlaw, who has appeared in 109 reported cases in the Divisional Court, Court of Appeal and House of Lords (now the Supreme Court), had qualifications and experience in a whole range of corruption cases both in the UK and in overseas jurisdictions.

“By way of example only, he represented two members of the House of Lords and a member of the House of Commons who were embroiled in the era-defining ‘cash for honours’ scandal which involved an alleged link between loans to UK political parties and the granting of life peerages (following representations, none faced charges and therefore cannot be identified).

“He prosecuted the largest ever investigation into corruption in the Metropolitan Police Service, which led to the conviction of two Flying Squad officers (Garner and McGuinness) who then turned Queen’s evidence against a number of former colleagues.

“He prosecuted a Crown Prosecution Service lawyer for corruption, following an undercover sting operation which revealed the individual to have been prepared to compromise prosecutions in favour of career criminals and has recently advised an individual seeking to bring a private prosecution against members of Her Majesty’s Revenue and Customs,” said Muhammad Shafee, adding that Laidlaw had been listed by the Sunday Times as one of Britain’s 500 most influential individuals.

The veteran counsel said Laidlaw also specialised in business and financial crimes, and was consistently ranked by the UK legal directories as one of their ‘star silks’ and was a previous recipient of the Chambers and Partners ‘Crime Silk of the Year’ award.

According to Muhammad Shafee, Laidlaw has appeared for a large number of corporate clients, which include Texaco, Gulf, BOC, Ford, Southern Cross, Esso, BHP Billiton, Fluor.

“He has appeared for both corporations and its directors in cases involving corporate criminal liabilities. In recent years, he has successfully defended BHP Billiton in a series of cases brought by the Department of Trade and Industry of England, the Maritime and Coastguard Agency and the Health and Safety Executive arising from incidents at the Liverpool Bay oil and gas field,” said the lawyer.

Muhammad Shafee pointed out that Laidlaw was also involved in the biggest fraud case brought by way of private prosecution in the UK on behalf of the Allseas Group, which resulted in the individual being convicted for fraud involving EU 100 million.

“I further believe that no advocate and solicitor practicing in Malaysia can be said to possess an equal degree of accomplishment, experience and expertise which has been acquired by the applicant,” he said.

He also said the serious, complex or novel issues related to the appeal would arise for consideration by the Apex Court for the first time, whereby most of the issues had never been substantively judicially determined in Malaysia in any like cases in which local advocates and solicitors had appeared.

“I verily believe there are no other advocates and solicitors in Malaysia which possess equal qualification, experience and expertise to that of the applicant, particularly for the purposes of advancing the appellant’s case,” said Muhammad Shafee.

He also asked the court to consider that the applicant’s undoubted, special and particular expertise would be advantageous to not only the applicant, but also the Malaysian criminal justice system.

He said the common law tradition, and in particular the experience of the English jurisdiction, had the capacity to inform and benefit the Malaysian national jurisprudence.

It is also to assist it to evolve and mature, as well as assist the apex court in assessing the interpretation of the Malaysian statutes and law to be in line with the the UK and International standards, he said.

As had been held in some cases, he said, foreign judicial authorities, in particular from the Commonwealth jurisdiction, would be able to provide solutions to Malaysian judges as to how similar issues could be resolved in those jurisdictions.

On Jan 25, law firm Messrs Shafee & Co submitted a six-page letter to the secretariat of Chief Justice Tun Tengku Maimun Tuan Mat on Najib’s intention to appoint a QC to assist him in complex issues and legal questions in his SRC appeal at the apex court.

On April 29, the Federal Court fixed 10 days in August to hear Najib’s final bid against his conviction and jail sentence for misappropriation of RM42 million in SRC International funds.

On Dec 8, 2021, the Court of Appeal upheld Najib’s conviction and the 12-year jail sentence and the RM210 million fine for misappropriating RM42 million belonging to SRC International.

The Federal Court would be the final avenue for the Pekan MP to appeal against his sentence and conviction involving the SRC International case. - Bernama Striving to bridge gap between women and men ‘Be more proactive with disaster management’ Ringgit opens higher vs US dollar for second consecutive day

‘Be more proactive with disaster management’

Ringgit opens higher vs US dollar for second consecutive day

Striving to bridge gap between women and men

3.‘Be more proactive with disaster management’

4.Ringgit opens higher vs US dollar for second consecutive day