Shahidan given discharge not amounting to acquittal in alleged molest case 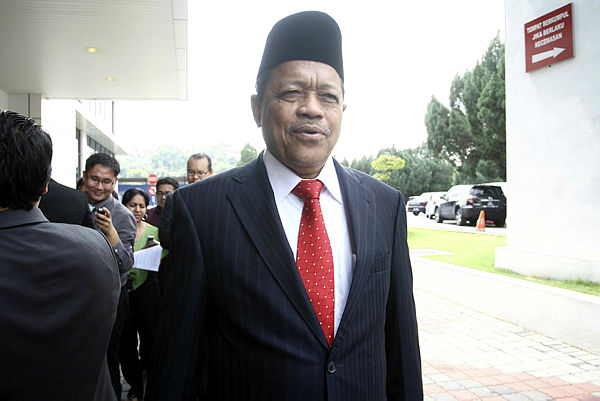 KANGAR: The sessions court today gave a discharge not amounting to an acquittal (DNAA) to Arau MP Datuk Seri Shahidan Kassim (pix), who was accused of molesting an underage girl in his car, six months ago.

Lawyer Zamri Ibrahim, who represented Shahidan, when asked, said Judge Ainul Shahrin Mohamad made the decision after being informed that the prosecution did not want to proceed with the case due to the victim not wanting to be questioned even through a camera.

“Today it was the victim’s turn to testify. She is the fifth prosecution witness. The victim when testifying, initially had confirmed the police report lodged by her but thereafter told the court that she did not want to be questioned further and did not want to continue with the case,” he said.

He said the prosecution then informed the court that they did not want to call the next witness and asked that the accused be given a DNAA under Section 254 of the Criminal Procedure Code.

Shahidan, 68, who is also a former Minister in the Prime Minister’s Department under the previous government, was charged with molesting the girl, who was then aged 15 years, in his Toyota Harrier SUV at the compound of the Tuanku Syed Putra Stadium here on October 20, 2018 at about 11.30pm.

He was charged under Section 14(a) of the Sexual Offences Against Children Act 2017, which provides for imprisonment of up to 20 years and whipping, if convicted.

Shahidan when asked to comment on the court’s decision afterwards, simply said: “I am fasting, I am a Muslim.”

The case, the hearing of which began yesterday, had called two witnesses to testify. Earlier today, the court heard testimony from two witnesses who testified in open court.

After that, the complainant was called to testify in-camera and the court asked the members of the public seated in the gallery to leave the courtroom.

Earlier, Inspector Norzuki Husin, who is in charge of the Kangar Police Headquarters (IPD) Special Branch, in his testimony had said that he did not know the case clearly until he was informed by his friend Saiful Anuar Abdul Hamid, a member of Buskers DSSK, while they were having a drink at a shop in Kuala Perlis on the evening of October 20, 2018.

He said he did not influence the family of the girl to lodge a police report and had only read the report made by the complainant (the teenage girl) while at the IPD the next day (Oct 21, 2018).

Another witness, Inspector Abdul Fatah Abdul Manaf in his testimony had said that he was the officer who recorded the complainant’s statement for the report at 3am on Oct 21, 2018 and also recorded her statement again when she came to withdraw the complaint at 11am the same day.

“I only handled the case for a week before I was directed to hand it over to ASP Salwani (no full name) from the Perlis contingent headquarters,” said Abdul Fatah. — Bernama