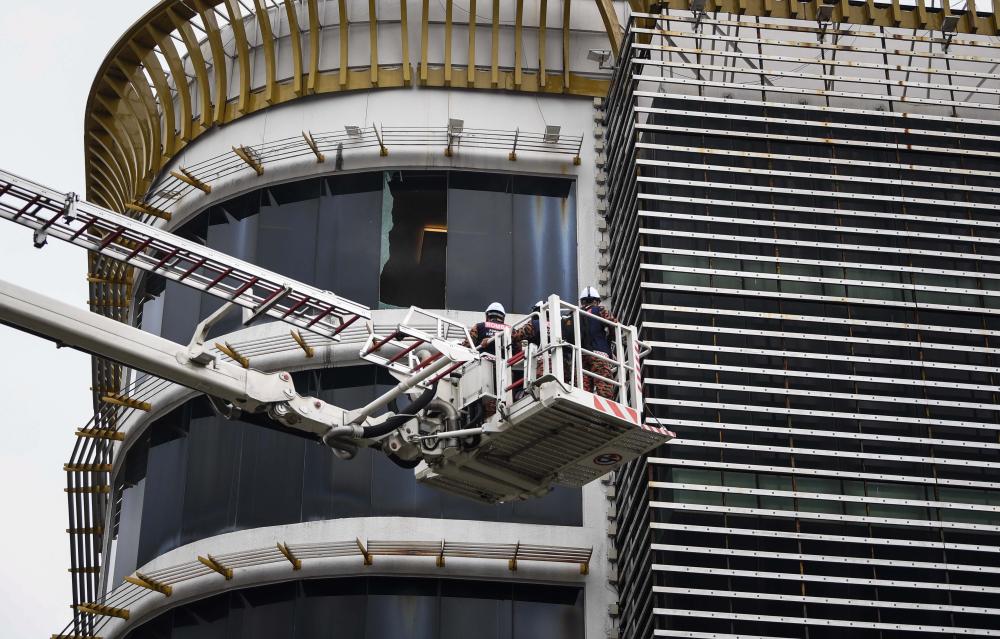 Firefighters are searching for bodies of victims trapped in a fire at an entertainment centre at Jalan Raja Dr Nazrin Shah, on Feb 20, 2019. — Bernama

IPOH: Six people, three of them foreigners and one person yet to be identified, were killed in a fire at an entertainment centre here today.

Two other people were critically injured, while seven people were saved, in the blaze that occurred at 5.40am on the fourth floor of an eight-storey building in Jalan Raja Dr Nazrin Shah here, according to Perak Fire & Rescue Department acting director Sayani Saidon.

Sayani told theSun that the cause of the fire was still under investigation.

“We have yet to ascertain the losses incurred as the premises owner has yet to inform us about that,” she added.

One of the two critically injured people is a Malaysian man, identified as Ng Kook Eng, 39, while the other had yet to be identified, she said, adding that both of them had been admitted to the Raja Permaisuri Bainun Hospital here for treatment.

Sayani said the department was alerted to the fire at 5.49am and a team of firefighters arrived at the location within 10 minutes.

The bodies of Tai and Lau were found near the exit of the premises at 6.09am, she said.

“Four bodies were in one of the karaoke lounges. Three of these bodies, one of a woman, were found in the washroom and the body of the other woman was just outside the lounge,” she told a press conference today, at the location.

Sayani said it is believed that those who died suffered breathing difficulties due to the thick smoke that filled the premises.

Asked whether a plan was approved for the entertainment centre at the eight-storey building which was once an office building, Sayani said the department would check that out.

“The original plan (with the department) is of office premises complete with smoke detectors but it has now changed to an entertainment centre.

“We will determine whether the owner had submitted a fresh plan for modified use (of the premises),” she said.

Meanwhile, Ipoh district deputy police chief (administration) Supt Mohd Nordin Abdullah said the police would investigate whether the entertainment centre had operated beyond the specified hours of up to 1am.

He added that the centre had a valid entertainment centre licence.

US, Canadian missionaries’ abduction poses latest test for a Haiti govt in turmoil

2.One killed, two injured after motorcycles crash on Lekas highway

3.US, Canadian missionaries’ abduction poses latest test for a Haiti govt in turmoil

4.Those walking around in malls, streets with their masks down are risking themselves and others: Experts