Six including two couples arrested with drugs worth RM86,768 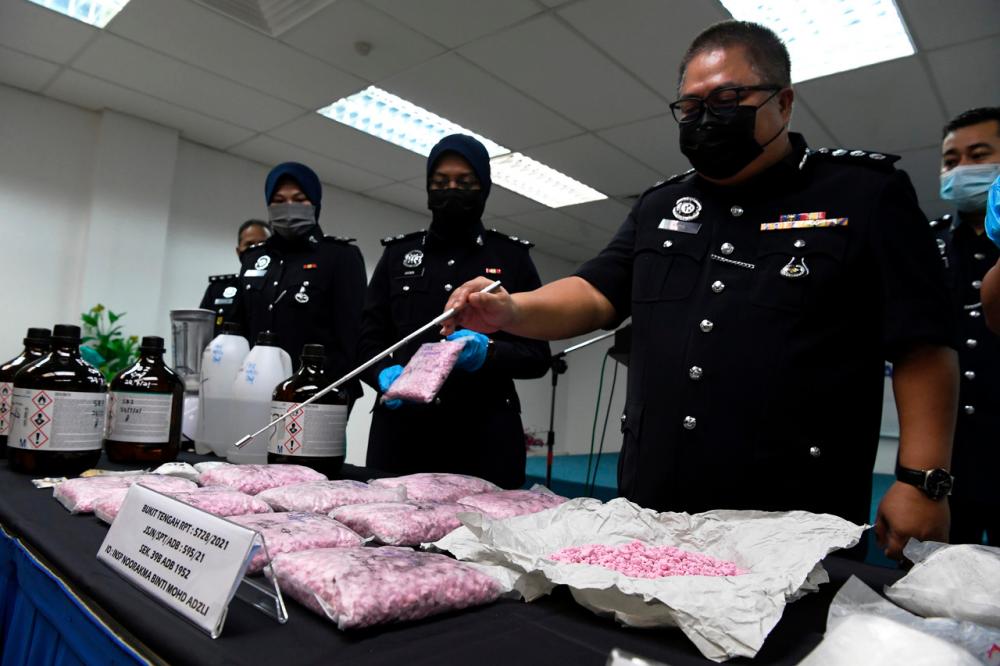 BUKIT MERTAJAM: The Penang police have busted a drug distribution and processing syndicate after detaining six individuals including two couples with drugs worth RM86,768.65 in a series of raids around the state from July 22 to 24.

Penang Narcotics Criminal Investigation Department (NCID) chief ACP Mustafa Kamal Gani Abdullah said acting on information and intelligence gathered by his department over the past two weeks, police arrested two individuals aged 34 and 40 in a car by the roadside at 5 pm on July 22, in the Juru area, here.

"Police seized 4,524 grams (of heroin) worth RM50,261.64 along with the two unemployed men who were believed to have just obtained the supply of drugs, and following their arrests, the police raided a car wash in Juru and arrested another 30-year-old man.

He said after further investigation, the police raided another apartment in Butterworth at 5.30 pm on Saturday (July 24), and arrested a couple, both aged 37, and seized 91g of heroin worth RM1,011 along with various equipment and chemicals suspected to be used to process heroin.

Mustafa Kamal said the investigation found that the husband worked as an assistant construction contractor, while the woman was a housewife, and both were believed to have the expertise to process heroin to obtain larger quantities.

He said the syndicate had been operating since the beginning of the year, and they obtained drug supplies from their network in Kedah and Penang, before marketing it to customers around Juru, Perai, Seberang Jaya and Butterworth.

"All those arrested have their respective roles, namely the first two men arrested were collecting and distributing drugs while the first couple which comprises a man who works as a factory technician and his wife, a private kindergarten teacher, stored the drug supplies in their rented house.

"The second couple processed heroin, and also used their house to store the drugs before it was sold to buyers. The leader of the syndicate is the 40-year-old man," he said.

According to Mustafa Kamal, the syndicate bought heroin at RM2,700 for every 454g, and resold it for RM3,400 and it was understood that they could make profits in the tens of thousands of ringgit every month.

The police also confiscated RM1,250 in cash, a motorcycle and three cars including an Audi TT, all worth a total of RM162,250.

He said the four men arrested tested positive for drugs and had between 1 to 13 criminal records, while and all six individuals were remanded for seven days to assist in the investigation under Section 39B of the Dangerous Drugs Act 1952.-Bernama

Christensen expects Chelsea to be on the front foot against Juventus

3.Christensen expects Chelsea to be on the front foot against Juventus