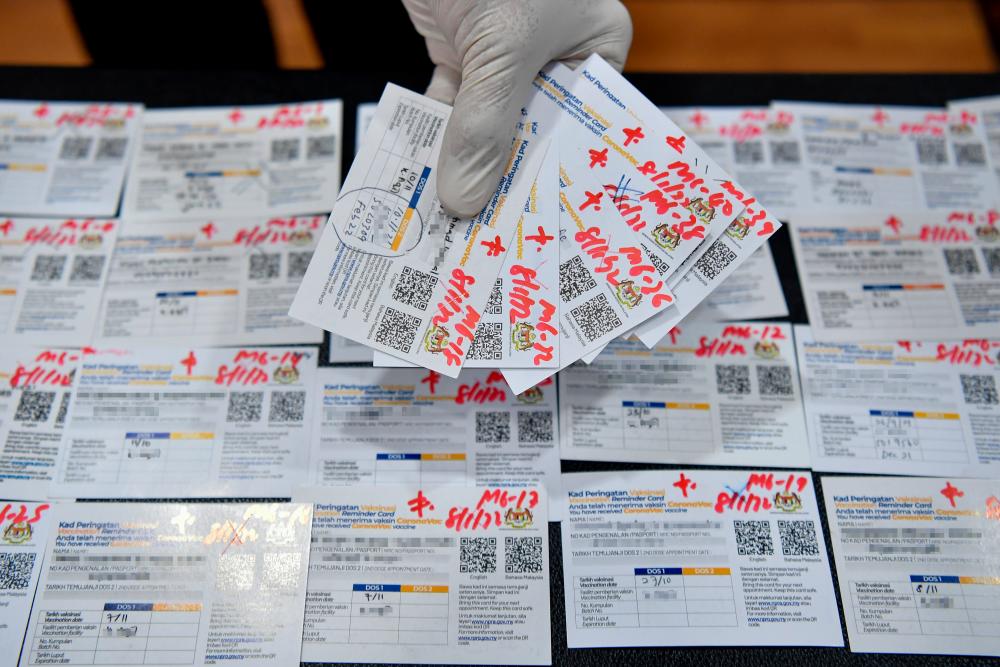 KUALA LUMPUR: Six medical personnel are among 25 people who were nabbed by police over the sale of fake Covid-19 vaccination certificates since last month.

Federal police commercial crimes investigations department director (CCID) Commissioner Dauk Kamarudin Md Din said in a press conference today that the six were three doctors and three nurses while the other suspects are a clinic staff, seven agents and 11 civilians.

He said they are involved in nine cases and investigations are expected to be completed soon before the probe papers are referred to the Attorney-General’s Chambers for further action.

Kamarudin said the latest arrest was on Tuesday when a 37-year-old doctor was held at the KL International Airport (KLIA) after a staff of a Sabah-based clinic lodged a police report on the sale of fake vaccination certificates by a medical practitioner.

On another matter, Kamarudin said two businessmen lost RM710,000 after allegedly being cheated by a company over the non-existent sale of Covid-19 self-testing kits.

He said the company claimed that it could acquire the kits from a manufacturer in China, prompting the victims to disburse payments.

However, Kamarudin said after the payments were made, the kits were never delivered.

He said the victims made enquiries with the manufacturer but were told that no such order was ever placed.

Kamarudin said as the test kits are in high demand, scammers are taking advantage of the situation to fleece those keen on purchasing it.

He urged business operators dealing with the kits to be cautious and not be lured by offers of low prices which could be aimed at deceiving them.

Kamarudin said they should carry out due diligence prior to making any payments especially when it involves an order for large quantities of the kit.

He said when in doubt or to channel information related to commercial crimes, the public should contact the CCID Scam Response Center at 03-26101559/1599.