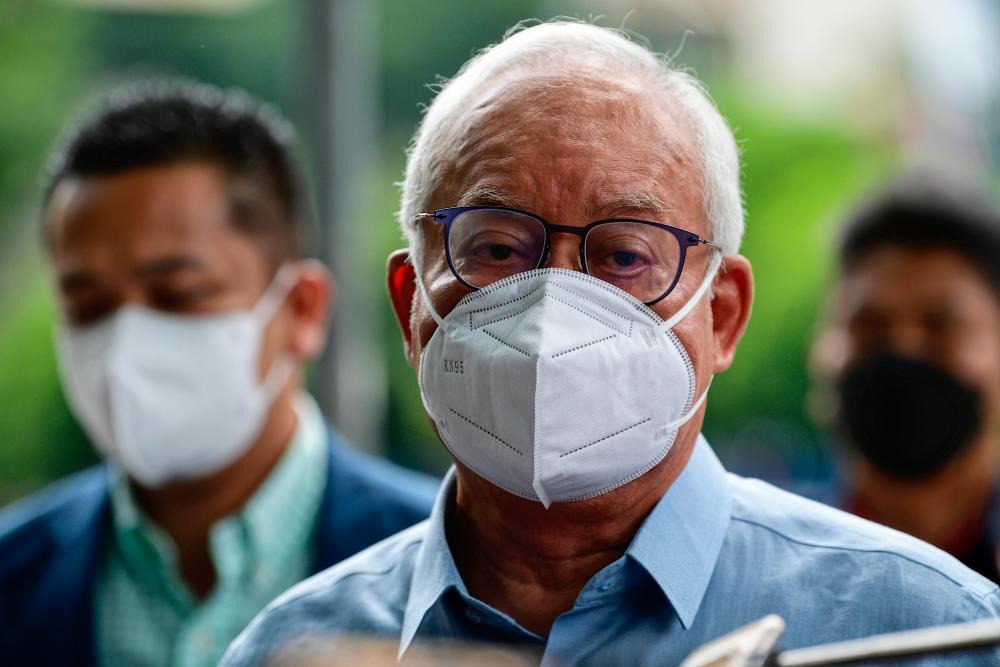 KUALA LUMPUR: The prosecution in Datuk Seri Najib Tun Razak’s (pix) SRC International Sdn Bhd case is objecting to the former prime minister’s application to adduce new evidence in his appeal, contending that it was only done to delay the appeal decision which was scheduled on Wednesday.

Through an affidavit-in-reply that was made available to the media, deputy public prosecutor Budiman Lutfi Mohamed said all the evidence in the case had been made available to the Kuala Lumpur High Court and the Court of Appeal for the determination of Najib’s appeal, hence there was no relevant additional evidence that was required for the fair disposal of the case.

“The prosecution states that this application is to delay the decisions on the appeals (criminal breach of trust, money laundering and abuse of position) by re-opening the entire case as is evident from the prayers and consequences of the orders sought. I categorically deny that the prosecution has concealed any fact relevant to the charges during the trial or appeal process before the Court of Appeal.

“In fact, former Bank Negara Malaysia governor Tan Sri Dr Zeti Akhtar Aziz was offered to the defence at the end of the prosecution’s case. However, the applicant (Najib) chose not to call nor interview Zeti for the purpose of calling her as a witness to establish the defence’s case,” said Budiman.

The prosecutor further said Najib could have made the application in January this year, as the issue of the statutory declarations made by Zeti’s husband Datuk Dr Tawfiq Ayman and his two sons was known by December 2020.

“There were no statutory declarations made by Zeti in this matter. The applicant could have commenced the application in January this year before the hearing of the appeal commenced on April 5.

“But, Najib took 11 months, and a few days before the Appeals Court is scheduled to deliver its decision on his appeal to file this application. This is a deliberate delay, and the irrelevance of the so-called fresh evidence to the charges demonstrates that this is a mala fide application,” he said.

He added that the subject matter sought in the application had no bearing on the trial or the appeal and there was no nexus between the additional evidence sought and the charges against Najib.

On the issue of Zeti having a long-standing relationship with fugitive businessman Low Taek Jho or Jho Low, the prosecutor said when taken cumulatively, it was not conclusively established that the duo had such a relationship.

“Evidence adduced by the prosecution and admitted by Najib himself in the trial showed that Jho Low, Nik Faisal Ariff Kamil (former SRC chief executive officer) and the late Datuk Seri Azlin Alias (Najib’s former principal private secretary) were acting on his instructions in relation to his bank accounts.

“The prosecution also established that Najib knew that the RM42 million deposited into his account was from SRC and not from 1Malaysia Development Berhad (1MDB). The issue of whether Tawfiq, Aliff and Abdul Aziz (the two sons) had received monies from 1MDB had no bearing on the subject matter in the appeal, which concerns SRC funds in Najib’s personal bank accounts,” he said.

He said the prosecution did not conceal evidence favourable to the defence, as former Attorney-General Tan Sri Tommy Thomas, and subsequently, the Minister in the Prime Minister’s Department (Parliament and Law), Datuk Seri Dr Wan Junaidi Tuanku Jaafar, had pointed out that the matter relates to 1MDB and not the subject matter of the present appeal.

“Furthermore, Thomas and the minister had said we have to wait for the investigation into Zeti’s case to be completed,” he said adding that, the recent recovery of funds from Nik Faisal and Tawfiq was in relation to 1MDB and has no relevance to SRC funds.

“The receipt of 1MDB funds by Nik Faisal is irrelevant to the SRC case. The prosecution has proved Najib’s knowledge of the SRC funds in his accounts, resulting in the commission of the offences charged. Najib alone, and not Jho Low, Nik Faisal nor Azlin, had benefitted from the RM42 million of SRC funds as the trial court found,” he said adding that, for these reasons he wants the court to rejects Najib’s application to adduce new evidence at this stage.

Filed on Dec 1, Najib is applying for the Appeals Court to allow and to direct for viva voce evidence to be taken from Malaysian Anti-Corruption Commission (MACC) chief commissioner Datuk Seri Azam Baki, MACC investigating officer Rosli Hussein, who was the 57th prosecution witness in the SRC case, as well as evidence of any other witness in relation to the case.

Najib, 68, stated that he made the application following the MACC’s press release dated Nov 19 this year, on the recovery of fund assets of 1Malaysia Development Berhad (1MDB) inter alia from Singapore, whereby the Government of Singapore had repatriated a sum of US$15.4 million to Malaysia relating to an account of Cutting-Edge Industries Ltd (CEIL) owned by Datuk Dr Tawfiq Ayman, the husband of former Bank Negara Malaysia (BNM) governor Tan Sri Dr Zeti Akhtar Aziz.

The court will hear submissions on Najib’s application tomorrow.

On Nov 23, the Appeals Court had fixed Dec 8 for decision, and on the same day, Najib had applied to the court to vacate the decision date, due to the fact that he would be in Singapore until Dec 5.

However, the Appeals Court rejected Najib’s application the next day.