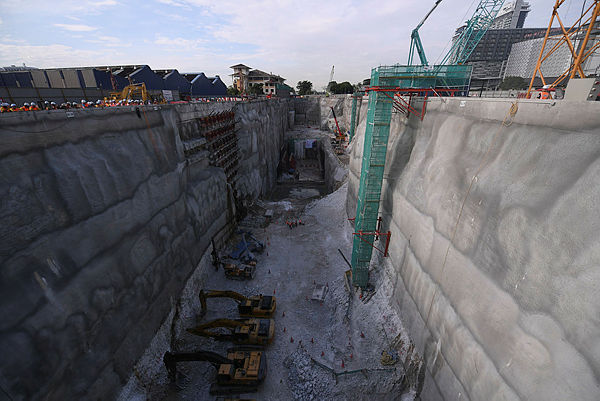 Its Strategic Communications and Stakeholder Relations director, Datuk Najmuddin Abdullah said with the current pace of progress, the project would be able to move to the next phase of construction as scheduled by 2022.

“The first completed tunnel drive has been done between Bandar Malaysia North MRT station and Chan Sow Lin MRT station, out of a total of 16 tunnel drives needed to complete the 13.5-km underground section.

“The tunnel section was excavated using the state-of-the-art Variable Density tunnel boring machine (TBM) and took approximately 11 months to cover a distance of 1.9-km underground,“ he said at a press conference after witnessing the first TBM breakthrough for the SSP MRT Line at the Chan Sow Lin MRT station construction site, here today.

He said the achievement was made more significant as the TBM, codenamed S-776-VD, was the same TBS that successfully completed the first tunnel drive for the Sungai Buloh-Kajang (SBK) MRT Line at the Tun Razak Exchange (TRX) station in January 2014.

The TBM underwent refurbishment at a plant in Pusing, Perak and redeployed for the SSP Line.

Najmuddin said tunnelling works for the SSP Line would be at full momentum with seven more TBMs to be launched within this year.

“We have a total of 12 TBMs that will be used for 16 tunnel drives in the SSP Line. Including the TBM which broke through today, there are a total of five TBMs currently in operation.

“From the total, eight of the TBMs are refurbished machines which have been used for the SBK Line, while four TBMs are newly purchased ones,“ he said.

“The completion of the first TBM drive is deemed an achievement, given the fact that the ground condition on this drive is unfavourable in comparison to the geology experienced in Line 1.

“Geologically, the ground profile of the tunnel alignment falls within Extreme V karstic limestone type which makes it very challenging. Karstic limestone is known for its unpredictable ground conditions, making it particularly risky for TBM operations,“ he said.

He added that tunnelling had proceeded smoothly with only minor incidences, as a result of the specially designed Variable Density TBM and the experience of MMC-Gamuda’s personnel after it was used on the SBK Line.

The operation of Phase One of the SSP MRT Line from the Sungai Buloh station to the Kampung Batu station, will begin in July 2021 while the rest of the line to the Putrajaya Sentral station will be operational under Phase Two in July 2022.

The line will serve as a corridor with a population of around three million, stretching from Sungai Buloh to Putrajaya and will include Sri Damansara, Kepong, Batu, Jalan Sultan Azlan Shah, Jalan Tun Razak, KLCC, Tun Razak Exchange, Kuchai Lama, Seri Kembangan and Cyberjaya.