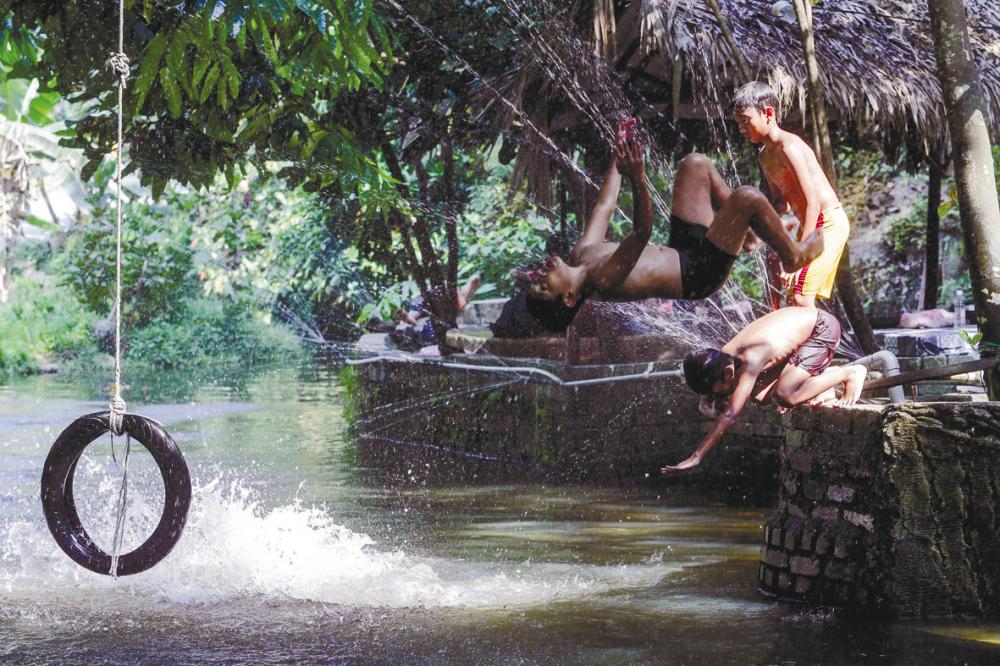 Boys having fun while cooling off at the Kemensah River in Selangor yesterday while many parts of the country experience unusually hot weather. Hafiz Sohaimi/THESUNpix

PETALING JAYA: Given the rising temperature and warmer weather, Malaysians are encouraged to stay hydrated and watch out for indications of heat-related illnesses.

“Go to a cooler, shaded place and monitor for any signs or symptoms of heat exhaustion or heat stroke.

“Prolonged exposure to high temperatures, in combination with dehydration, may lead to heat stroke, which is the failure of the body’s temperature control system.

“It can also occur as a result of internal heat production due to strenuous activities,” he told theSun, adding that the Health Ministry has given an assuranc that all hospitals and health clinics are prepared to treat cases related to the current heat wave.

“Guidelines, especially heat stroke management, have been distributed to the emergency and trauma departments and health clinics to assist medical personnel.

“The pamphlets have also been distributed to the public to create awareness on signs and symptoms of illnesses related to heat, as well as precautionary measures to be taken.”

Noor Hisham also said the ministry will educate the public on the situation via mass media and social platforms.

The Malaysian Meteorological Department had cautioned that the southwest monsoon might cause lower rainfall distribution and there would be more days without rain in most parts of the country than during other seasons.

The southwest monsoon began on May 14 and will continue until mid-September.

“However, heavy rain with strong winds and lightning due to the squall line phenomenon – a group of storms arranged in a line, often accompanied by a squall of high wind and heavy rain – could still occur on the west coast of the peninsula and western Sabah,” said its director Muhammad Helmi Abdullah.

“There is a year-to-year variation of the onset of the seasons, and it’s a little early this year. During the southwest monsoon when there is a lack of rainfall and increased insolation, the temperature usually increases. This explains why we tend to have heatwaves.”

However, when it comes to the heat index, it is not just the apparent temperature that is important, it also takes into account specific humidity, he explained.

“An 80% specific humidity, for example, can lead to a heat index that can cause heat strokes,” he said.

He added that the alarming hot climate we are experiencing could be caused by higher specific humidity as well.

“The inconsistent moisture we have in the region could be influenced by the La Nina phenomenon, which we are now experiencing,” he said.

“It is a weather pattern that occurs in the Pacific Ocean, that is still ongoing. This anomalous moisture can lead to higher specific humidity.” 4.Prosecution reprimands Zahid, tells him court is not ‘coffee shop’