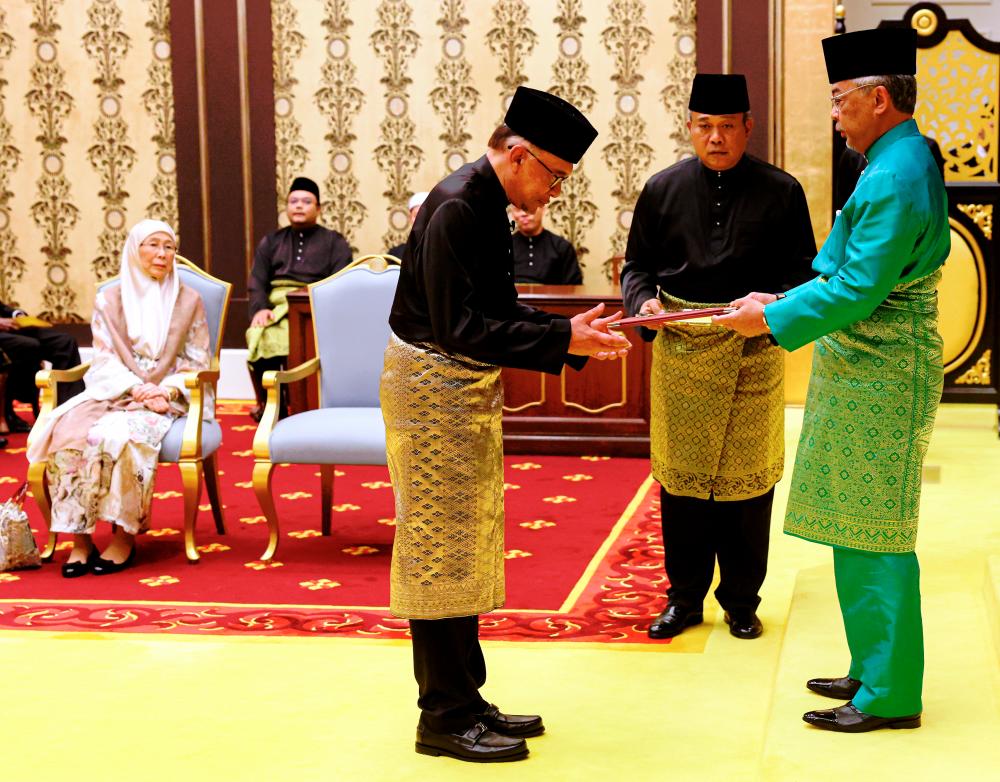 KUALA LUMPUR: Datuk Seri Anwar Ibrahim was yesterday appointed Malaysia’s 10th prime minister, five days after the 15th general election (GE15) that resulted in none of the three coalitions securing a simple majority threshold of 112 seats in the 222-seat Parliament.

He took his oath of office at 5pm at Istana Negara after having secured majority support from many other political parties that joined him to form a unity government.

A media statement issued yesterday by Comptroller of the Royal Household of Istana Negara Datuk Seri Ahmad Fadil Shamsuddin said the appointment was finalised after the Yang di-Pertuan Agong Al-Sultan Abdullah Ri’ayatuddin Al-Mustafa Billah Shah deliberated the opinions of the Malay Rulers, who convened a special meeting at Istana Negara yesterday to make the best decision in the interests and for the well-being of the country and the people.

The impasse that followed GE15 saw Perikatan Nasional (PN), led by Tan Sri Muhyiddin Yasin and Pakatan Harapan (PH), led by Anwar, both claiming to have majority support to form the government.

In the subsequent days of high drama, Muhyiddin spoke to the media and claimed to have submitted 115 names to the Palace.

He also rejected outright a proposal from the King for PN to form a unity government with PH.

However, in a turn of events yesterday, PN secretary-general Datuk Seri Hamzah Zainudin said the coalition’s supreme council agreed yesterday to “consider” the proposal to form a unity government with “like-minded” parties. But the decision came a little too late.

On Wednesday night, Umno secretary-general Datuk Seri Ahmad Maslan said the party supported the idea of being part of a unity government, as proposed by the King, but one that is not led by PN.

He said the BN supreme council had unanimously decided to support and uphold the proposal by the King for the coalition to consider participating in a unity government to ensure that a stable and prosperous government can be formed.

However, that government must not be led by PN, he added.

Reacting to Anwar’s appointment, Bersih chief Thomas Fann said the election watchdog is glad that the impasse on the appointment of a new prime minister has been resolved.

“We hope that Anwar will be a prime minister for all Malaysians, even those who did not vote for him or PH.

“It is time for our nation to heal from decades of division over race and religion and I hope he, with the support of BN, will start that process. It is a new day for Malaysia and hopes are high for everyone,” he said.

“The attempt by the previous PH government to create a media council was commendable, but it languished. My hope (as a media scholar) is that the new government will see it through this time, which will benefit Malaysian society as a whole.

“While all governments in Malaysia should be inclusive, the fact that Anwar has highlighted that there are clear divisions in our society (as played up by certain quarters) is praiseworthy.

“With Anwar finally at the helm, it will be interesting to see the full extent of his inclusive policies, which will benefit all Malaysians and not a select few,” he said.

“This includes attending to the major structural impediments that are long recognised. (This means) the economy is to be broadly fit and ready to compete globally and be attractive as a destination for quality talents and investments. (Additionally, he should) assure the nation, all levels of society and businesses that they can take part and benefit from growth. Inclusivity is key in the way forward,” he said.

“(Malaysia should also) continue to invest in infrastructure and good telecommunications networks. Invest in nation-building through the idea of shared prosperity and respect for all citizens and working for a progressive future.”

Meanwhile, Universiti Tun Abdul Razak economist Prof Dr Barjoyai Bardai said for the most part, there is an immediate need in the short term to debate Budget 2023 in Parliament and to implement or revise it as soon as possible in the interest of the nation. 1.Two children injured in attack near school in Germany