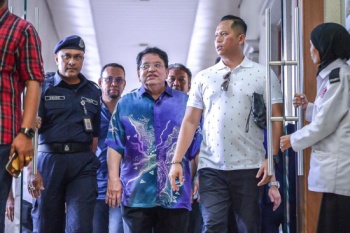 KUALA LUMPUR: Former Federal Territories Minister Datuk Seri Tengku Adnan Tengku Mansor pleaded not guilty in the Sessions Court here today to two counts of corruption and an alternative charge with accepting a bribe of RM3 million in connection with a land sale for construction of affordable homes in 2013 and 2016.

He made the plea before judge Azman Ahmad.

On the first charge, Tengku Adnan, 68, who is Putrajaya Member of Parliament , 68, was alleged to have dishonestly received for himself RM1 million in gratification from a businessman, Tan Eng Boon , through a Public Bank cheque belonging to Pekan Nenas Industries Sdn Bhd that was deposited into a CIMB Bank account belonging to him (Tengku Adnan).

The gratification was for approving an application by Nucleus Properties Sdn Bhd (now known as Paragon City Development Sdn Bhd) to raise the plot ratio of the site with development at Lot 228, Jalan Semarak, Kuala Lumpur.

The charge, under Section 16(a)(A) of the Malaysian Anti-Corruption Commission Act provides an imprisonment for up to 20 years and fine of not less than five times the amount or value of the gratification, or RM10,000, whichever is higher, if found guilty.

Tengku Adnan, who is also UMNO treasurer, was also charged when he was Minister of Federal Territories, to have received for himself RM1 million without consideration from Tan through a Public Bank cheque belonging to Pekan Nenas Industries Sdn Bhd which was deposited into his account, despite knowing that Tan, who is a director at Nucleus Properties Sdn Bhd (now known as Paragon City Development Sdn Bhd) was concerned with his official function.

He was charged under Section 165 of the Penal Code for the offence and faced an imprisonment for up to two years or with fine, or both if found guilty.

On the second charge, Tengku Adnan was alleged to have accepted for himself valuable thing in the sum of RM2 million from one Chai Kin Kong, whom he knew had connection with his official function, through a Hong Leong Islamic Bank cheque belonging to Aset Kayamas Sdn Bhd which was deposited into a CIMB Bank account belonging to Tadmansori Holding Sdn Bhd which Tengku Adnan had interests in.

Banks collaborating with AKPK to assist B50 borrowers through Urus

2.Banks collaborating with AKPK to assist B50 borrowers through Urus