TH depositors to know tomorrow if fund is paying dividends 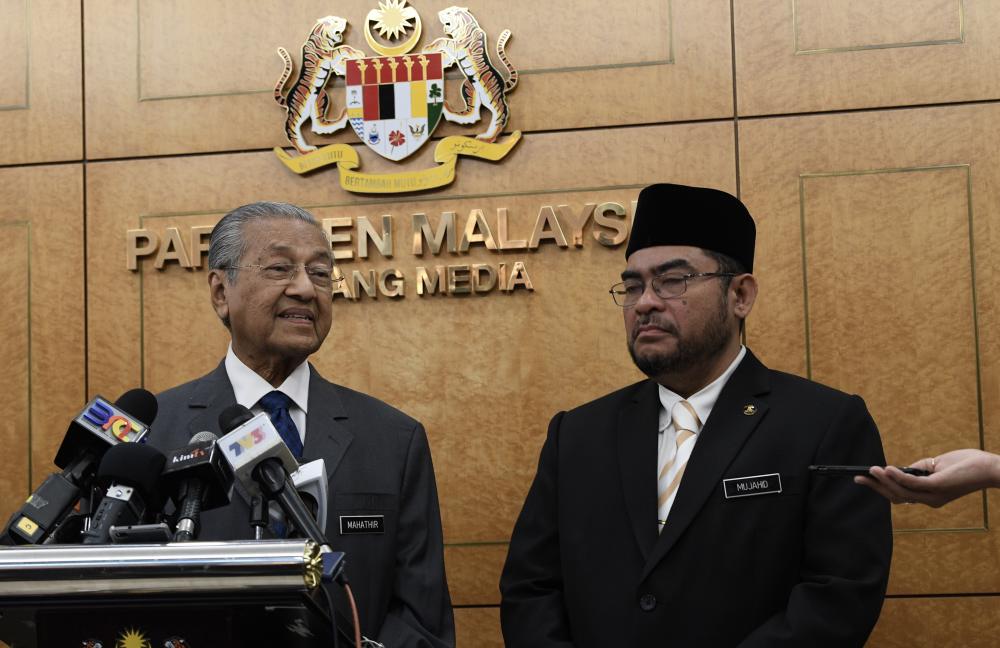 Prime Minister Tun Dr Mahathir Mohamad speaks during a press conference at the Dewan Rakyat sitting at the Parliament House, on April 4, 2019. — Bernama

KUALA LUMPUR: Lembaga Tabung Haji’s (TH) depositors may know tomorrow if it is paying out dividends (hibah) for 2018.

Prime Minister Tun Dr Mahathir Mohamad said this was one of many issues regarding the fund that would be deliberated in the weekly Cabinet meeting.

“The report for TH’s restructuring plan will be tabled in Cabinet tomorrow,” he told the Dewan Rakyat during the Ministers’ Question Time, here, today.

“The ministers will discuss in detail on issues relating to the fund’s financial status and related matters. This includes TH’s ability to issue hibah to its contributors. The fund will make an announcement soon after a decision is made by the Cabinet.”

Mahathir was responding to a question from Datuk Noraini Ahmad (BN-Parit Sulong) on when TH was expected to announce the dividend for 2018, claiming that in previous years, announcements were typically made in February.

The premier explained that funds “stolen” from TH’s management under the Barisan Nasional (BN) administration have affected the pilgrim fund’s ability to pay out dividends.

Under the Tabung Haji Act 1995, payment of dividends is prohibited if TH records a deficit and has no distributable profits.

On another question if TH had indeed incurred losses since BN days and that dividends were paid out despite of that, Mahathir acknowledged the matter, noting that many assets purchased then were higher than the market value.

“That is why the current government is reviewing all of these, and this matter will be discussed in Cabinet as well. I will provide full information on what has happened to TH,” he said.

Last year, to address the losses by TH, the fund sold its underperforming assets worth RM10 billion to a special purpose vehicle in exchange for RM19.9 billion in sukuk and Islamic redeemable convertible preference shares (RCPS-i).

On March 18, it was revealed that TH’s assets have since increased to RM76.5 billion for 2018 against a liability of RM75.5 billion.