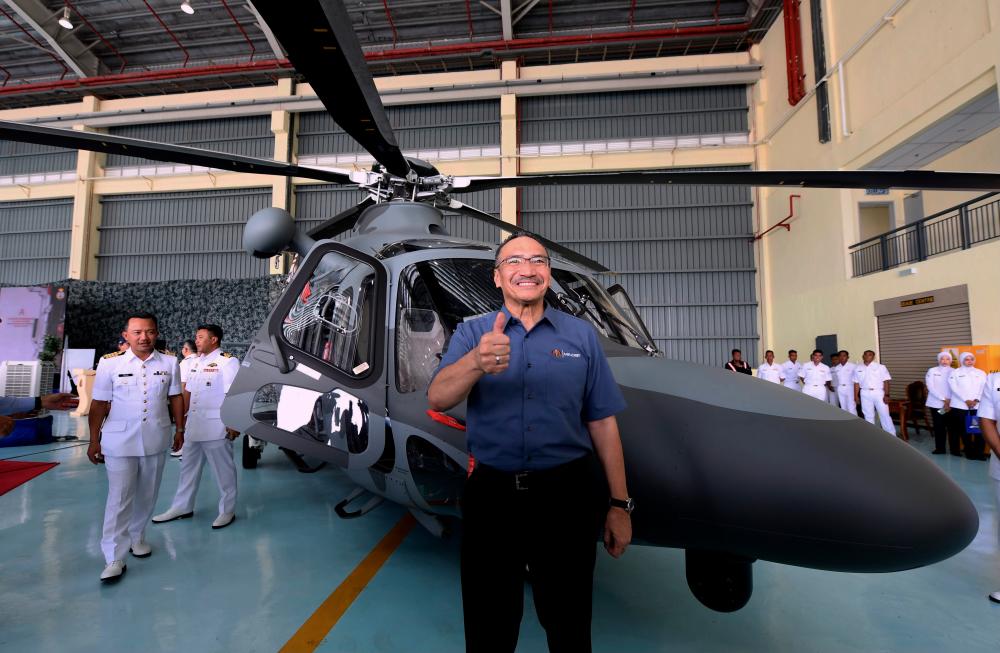 KOTA KINABALU, July 1 - Senior Minister of Defense Datuk Seri Hishammuddin Tun Hussein after the handing over ceremony of the Maritime Operations Helicopter to the Royal Malaysian Navy (RMN) at the East Fleet Command Headquarters of the RMN Kota Kinabalu Sepanggar Base today. BERNAMAPIX

He said the assets - two of which were received today and another expected in September - would enable enforcement patrols to be carried out together with existing assets to strengthen airspace surveillance in Sabah and Sarawak waters.

“The purchase of the AW139 helicopters was made in line with the wishes of the end-user, namely the RMN, which is in dire need of Maritime Operations Helicopters (HOM).

“Having these new assets will also help uplift the morale and spirit of personnel to perform in ever-challenging operational assignments,” he told reporters after officiating the Kota Kinabalu Naval Air Station (SUKK) and the setting up of Squadron 503, besides handing over the HOM operations at the Kota Kinabalu RMN Base here, today.

Hishammuddin said Squadron 503 was set up to increase the operational efficiency of HOM, apart from performing several other key tasks, including monitoring the Malaysian maritime zone, special forces operations as well as air and crew training.

He said the new squadron would also perform secondary duties such as assisting in search and rescue (SAR) operations, medical evacuations, casualties evacuations, as well as humanitarian assistance and disaster relief missions.

For a start, he said, a total of 25 officers and 92 personnel of various ranks would operate the new squadron and be assigned to four divisions, namely aviation safety, operations and training, administration and logistics, and aerospace engineering.

“Squadron 503 will be under the command of SUKK. This is important to further increase the efficiency of the administrative unit, logistics management and aviation operations supervisor, especially in the Eastern Fleet,” he said.

“The Cabinet has agreed for the LCS procurement project to continue. It has now entered a six-month mobilisation process as recommended by the Cabinet. Negotiations with OEMs and vendors are underway to ensure the project gets back on track.

“Once the mobilisation process is completed, the physical construction of the LCS ships will resume in the near future,“ he said.

In the meantime, Hishammuddin said further efforts would be made to improve security in Sabah, including building a new Lahad Datu camp for the army which begins construction his year, as well as the Paradise Camp in Kota Belud.

At the ceremony, Hishammuddin also announced the approval of an RM1 million allocation for the repainting of the military quarters at the Kota Kinabalu RMN Base and ordered for it to commence immediately. - Bernama