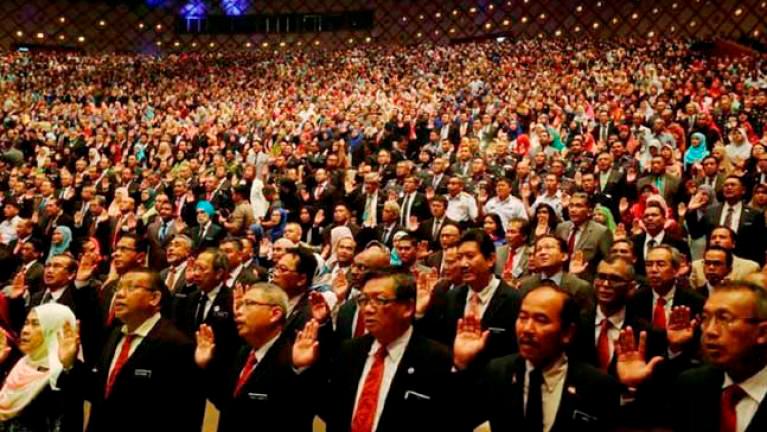 -Pix for representational purpose only.

PETALING JAYA: Malaysian taxpayers spent RM82 billion last year just to keep civil servants on the job. They also forked out RM27.1 billion to show their appreciation for the work done years ago by those who have retired from the service.

The bad news is that the sum will continue to rise as salaries increase and new personnel are recruited to replace those who have retired.

Whether the average Malaysian gets what he is paying for is a debate for another time, but the fact is that many now see the service as highly bloated.

Tan Sri Ramon Navaratnam, a veteran of the government administration himself, pointed out that the civil service has never been reviewed since independence 64 years ago.

“My view is that at 1.6 million, we have a very large civil service, larger than in many other countries,” said the former secretary-general of the Treasury and later, the Transport Ministry.

He attributed this to the government’s “Isi Penuh” policy to fill up all vacancies.

“The time has come to find out exactly how many personnel we have and whether they are performing up to expectations.”

Ramon said the World Bank has data on the civil service of every country, making it the ideal party to conduct such a study.

He added that the government could start by looking at natural attrition and reskilling of excess staff to keep expenditure down, a point raised in a front page report by theSun on May 31.

According to the report, economists had voiced support for former Bank Negara Malaysia deputy governor Tan Sri Dr Lin See Yan’s proposal to reset the budget to “zero base” to determine areas where expenditure can be reduced.

Ramon said the administration’s policy of participating in the economy through government-linked companies also contributes to the size of the civil service.

“If we promote a wider participation of the private sector in the economy, it will indirectly help to reduce the number of civil servants.”

He proposed a royal commission of inquiry be created to study the civil service, focusing on its size, function, productivity and standards as a way forward.

“We must realise that the expenditure on the civil service will continue to rise, and if the service becomes too large, the government may end up borrowing just to pay salaries and pensions,” Ramon added.

“Surplus staff can also be retrained for other jobs, for instance, in critical areas, so the need to employ more civil servants will not arise,” he said, adding that in the long run, this will also raise productivity.

He said for instance, the education sector comprises 40% of the civil service to ensure optimum teacher-student ratio.

“The health services accounts for 15% of the civil service based on the ratio of healthcare personnel to the population,” he said.

“We must not forget that unlike Australia, the United States or Canada, federal, state and local government staff as well as those of statutory bodies in Malaysia are part of the larger civil service. Taking that into consideration, our civil service is not actually that large,” he added.

5.Man dies after hacking by house-mate