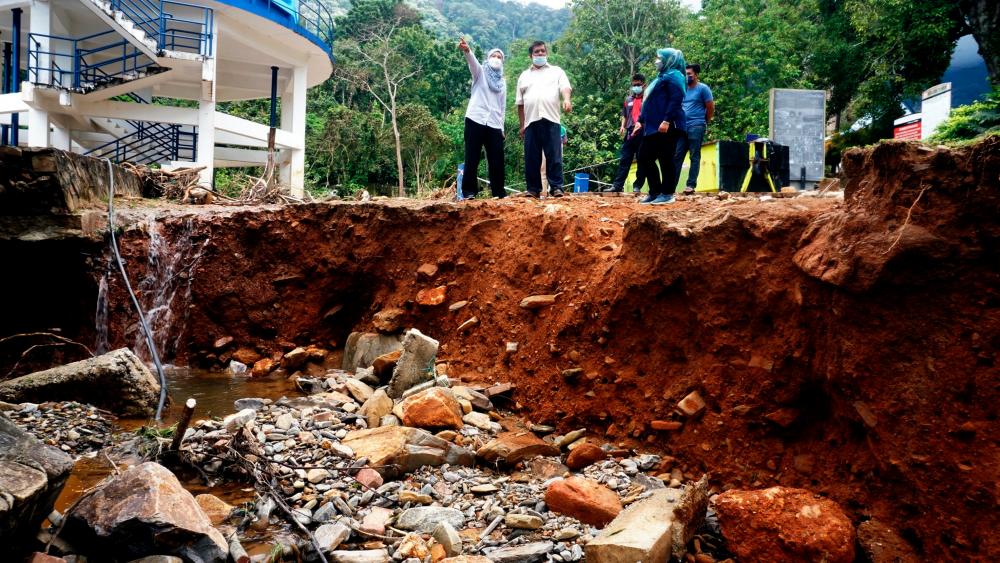 YAN: The Titi Hayun, Batu Hampar and Seri Perigi resort areas here, which have been adversely affected by the Gunung Jerai water surge incident on Aug 18, are still unsafe to be visited by the public for the time being.

State Works, Water Supply and Water Resources and Energy Committee chairman, Datuk Suraya Yaacob, said that this was because several construction structures and land in the areas were found to have collapsed, thus changing the landscape in the area resulting in fast and uncontrollable water flow.

“We will not allow anybody to enter the areas just yet, in the current situation. Many structures are unsafe and it is quite worrying,” she told reporters when visiting the location of a flash flood in Titi Hayun here, today.

Last Wednesday, the media reported that 160 houses in several villages in the district of Yan were affected by flash floods that occurred following heavy downpours since afternoon.

On Thursday, Bernama reported that residents of villages in the district were traumatised by the flash flood, after facing the same situation three times after the water surge tragedy on Aug 18.

In this regard, Suraya urged the government, through the Ministry of Environment and Water (KASA), to speed up the construction of the RM20 million Sabo dam in the Gunung Jerai area, to replace the trees and stones which acted as buffer prior to this.

She said that the dam would slow down the movement of the water and help reduce the destruction downstream and in villages in the area.

For the record, on Aug 23, Prime Minister, Datuk Seri Ismail Sabri Yaakob, announced an allocation to upgrade the river and drainage system for 27 kilometres in phase one, which also involves the construction of the dam.

In the meantime, Suraya denied allegations by the local community regarding the delay in cleaning and deepening of the said river, which caused the flash flood on Wednesday in the area.

She said that the government had done its best for the people and hoped they would be patient because the tragedy that took place was a natural disaster.

“Who said that we were slow? We have constructed retaining walls along the river but they were all washed away by the fast currents downstream and to the banks of the river, not because we were slow.

“We understand their problem and I hope they understand nature,” she said.

“Work to repair and clean the river has started in the middle of September. As of now, work has progressed by 65 per cent and it is expected to be completed in early November,” Suraya added. — Bernama

5.Businesses and healthcare experts say ‘no’ to more curbs