‘Top govt positions should be for Malays only’ 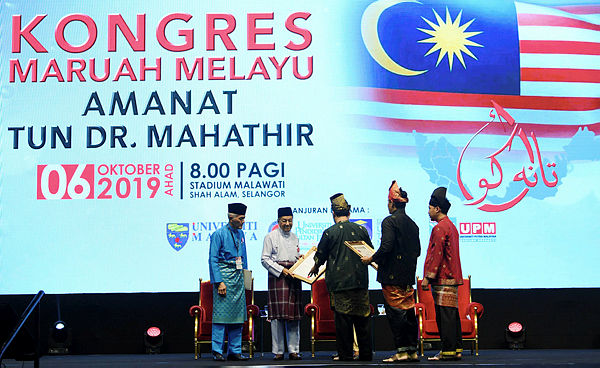 SHAH ALAM: The Malay Dignity Congress wants all top government positions to be held only by Malay-Muslims and for vernacular schools in the country to be abolished.

These demands were among the many resolutions across five main clusters — religion, culture, economy, education and politics — that were passed at yesterday’s congress, that saw a number of top leaders from both sides of the political divide attending.

PAS Youth deputy chief Ahmad Fadhil Shaari, who presented the religion cluster resolution, said it was important not to place non-Malays and non-Muslims in any of the government’s top positions, claiming that Islam was currently being threatened.

“Apart from them, other top posts include chief justice, attorney-general, chief secretary to the government, inspector-general of police, and the armed forces chief,” the Pasir Mas MP said during the congress in front of more than 5,000 attendees, here, yesterday.

Currently, only the Finance Minister and Attorney-General’s positions are being held by non-Muslims, respectively by Lim Guan Eng and Tommy Thomas.

Ahmad Fadhil said the congress also urged all other non-governmental organisations and bodies, including the Human Rights Commission (Suhakam) and Bar Council, to not interfere in matters pertaining to Islam in the name of human rights.

Universiti Pendidikan Sultan Idris (UPSI) graduate Nurul Fatin Aqilah Rahim, who presented the education cluster resolution, demanded among other things, for the government to convert to a single stream school to promote unity.

“Vernacular schools must be abolished in stages, because education is key to unity. There should be a single medium language and curriculum in all schools,” she said.

Under the culture cluster resolution, the government has been urged to use only romanised Malay and Jawi scriptures in all official matters, and that strict action be taken against anyone who rejects the use of Jawi or misuses it.

The resolution was later handed to Mahathir, with the prime minister saying the matter would be brought up to the government for consideration.

“Obviously we will take it up to the government for discussion, as this reflects the feelings of the Malays, and they are worried about their future.

“We want to find ways so the Malays can play a role in restoring their honour,” he said in a press conference later, adding that not all the resolutions would be accepted and implemented.