Human trafficking syndicates involving the sale of domestic helpers were rife during the Covid-19 pandemic and the Movement Control Order (MCO). Many were reported to have fallen prey to these syndicates, incurring losses in thousands of ringgit. 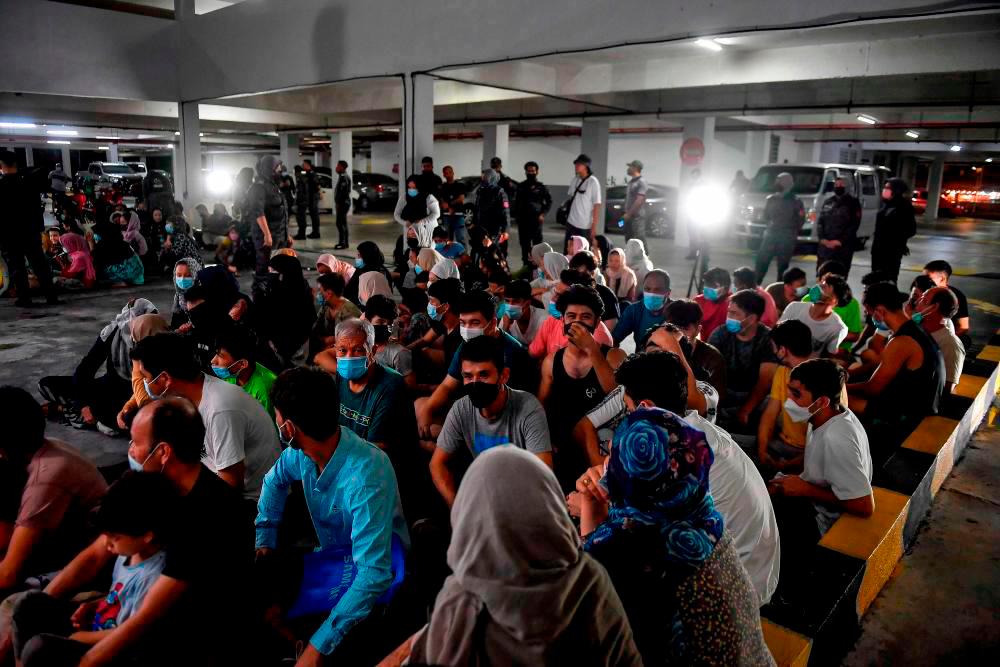 KUALA LUMPUR: Shocked by the exorbitant cost of hiring a maid, many Malaysians have resorted to unregistered agents to solve their problem.

With ‘sky high’ fees of up to RM15,000, they are left with no choice but to resort to these agencies which offer lower fees.

In the end, many have reportedly lost huge amounts of money down a ‘maid sinkhole’ as these unregistered agencies exploit their dire need for domestic help.

According to the Secretary General of the Malaysia International Humanitarian Organisation (MHO) Datuk Hishamuddin Hashim, the high cost of engaging a maid has opened new avenues for human trafficking syndicates to go full swing with their ‘maid selling activities’.

“They (unauthorised agents) would make a profit-sharing pact with these maids to cheat employers who are desperate for domestic help. Usually, the cost charged by these unregistered private agencies is around RM7,000.

“Just imagine in a month, the same maid can swindle and disappear after serving for several days in three houses and they could easily earn RM21,000,” he told Bernama recently.

Given the high cost of hiring maids, Hishamuddin said the government through the Ministry of Human Resources should take steps byreducing the cost in a bid to avoid the people from falling prey to maid scam operators.

“Domestic helpers have become a necessity especially for working parents in Malaysia. However, with the high cost (RM15,000) of hiring a maid, who can afford to pay for such services and there is no guarantee that the maid will not abscond after receiving her payment.

“There were cases when maids fled after working for three or four months. As such, many people prefer to hire maids through licensed foreign worker employment agencies under the Ministry of Human Resources and the embassy,” he said.

He said the ministry should engage in discussions to reduce the costs of hiring domestic helpers to a more suitable level to encourage the selection as well as the hiring of maids from registered agencies.

From the enforcement aspect, he is of the view that the Immigration Department of Malaysia (JIM) can implement a tagging system to track maids who are on the run.

“Whenever maids run away, we do not know where to find them. I propose that there should be an application similar to MySejahtera to track the location of these foreign workers so that those who fled from their employers (employers who do not have any record of maid abuse offences) will face the law,” he added.

He said the blacklisting approach (by JIM) is not as effective as some errant foreign workers who commit the act of abscondment would continue to stay and work in the country for up to six years and return to their homeland after paying their compound.

To address the issue of abscondment of foreign workers without valid reasons, Hishamuddin said the government should tighten laws in addition to issuing them with stern warnings.

He said cases of maids running away from their workplace are brought about by the fact that some foreign workers enter the country to work as maids as this is the easiest way to obtain work permits.

“These foreign workers enter the country as maids for purposes of obtaining their visa and work permit. Once the work permit is obtained, the maid will run away as she does not want to stay in other people’s house as she wants the freedom to work in other sectors as cleaner, salon and restaurant worker.

“But their visa states that they are hired as maids, contrary to the job they are doing. They have breached their work permit provisions as the easiest way to get a work pass is by working as maids,” he said, adding that foreign workers should be given stern warning that they cannot indiscriminately change jobs as it is an offence under Section 39B of the Immigration Act for abusing their work permits.

Hishamuddin said maids who wish to change their jobs, say as cleaner are required to return to their homeland and cancel their pass or permit first and later make a new application for a new job.

“Employers who have been cheated by maids who escaped can lodge a complaint to JIM to cancel their employment pass and blacklist them,” he said.

Use of illegal immigrants

Human trafficking should not be viewed lightly as it is the third largest crime in the world behind drugs and arms trafficking.

The United Nations defines human trafficking as “the recruitment, transportation, transfer, harbouring or receipt of people through force, fraud or deception, with the aim of exploiting them for profit. The traffickers often use violence or fraudulent employment agencies and fake promises of education and job opportunities to trick and coerce their victims.”

DSP Alif Charles Belon, Commander Of Task Force, the National Strategic Office (NSO), the Council for Anti-Trafficking in Persons and Anti-Smuggling of Migrants (MAPO) said human trafficking and migrant smuggling are crimes of opportunity and can be committed by anyone irrespective of their citizenship including Malaysians.

He said there was renewed demand for maid services especially in the early phase since the reopening of the economic and social sectors under the National Recovery Plan.

“The short supply of maids gave a window of opportunity for irresponsible individuals to offer maid services which did not go through the proper recruitment procedures,” he said.

Citing an example, Alif Charles said some illegal immigrants who were stranded in the country during the COVID-19 pandemic were offered by individuals or agents to work as maids without going through the basic training.

“When the maid could not perform her tasks, the agency should get a replacement. While payment has been made, no replacement is made, hence the employer felt cheated. Due to the high demand, the agency will sell the incompetent maid to another employer,” he said.

Alif Charles said human trafficking is a form of modern slavery which occurs in almost every country in the world.

The modus operandi in human trafficking is unique and dynamic and can happen to all groups regardless of gender, age, nationality in the country or across national boundaries.

“Human trafficking includes other forms of sex exploitation, forced labour or services, slavery or practices similar to slavery, servitude or the removal or organs.”

In the context of selling of maids, he said crimes involving maids are categorised under work exploitation or forced service.

According to MAPO statistics, a total of 252 cases involving forced work exploitation were reported from 2019 to June 2022 with 346 cases of sex exploitation reported during the same period.

Alif Charles said these activities are expected to thrive as many decline to report to the authorities after becoming victims out of fear and some members of the public lack the knowledge on human trafficking and they (victims) have been deprived of their rights.

“Some victims refuse to provide the relevant information as most of them do not have valid permits/documents and are afraid of being hauled up by enforcement agencies,” he said.

In Malaysia’s case, he said the majority of human trafficking victims are foreign workers in various economic sectors and they have been exploited by their employers, who among others illegally hold on to their workers’ passports and prohibit them from taking leave or medical leave.

“Besides that, debt obligations, physical abuse, long working hours and overtime allowance as well as salary not paid by the employer, are regarded as exploitation,” he explained.

“In this regard, the relevant authorities involved in the recruitment of domestic helpers should ensure that no human trafficking element takes place whether at the employer level or at the supply chain,” he said.

In combating human trafficking crime, the government, according to Alif Charles has undertaken various initiatives including through the Anti-Trafficking in Persons and Anti-Smuggling of Migrants Act (ATIPSOM) 2007.

The Act was enforced in 2008 and amended thrice that is in 2010, 2015 and 2021, to strengthen the legal framework as well to promote the victim centred approach.

“Besides that the Ministry of Home Affairs (KDN) has launched the National Action Plan on Anti-Human Trafficking 2021-2025 (NAPTIP 3.0) on March 31, 2021. Basically, NAPTIP 3.0 is a continuity of the NAPTIP 2010-2015 and NAPTIP 2016-2020 which was developed as the national strategic roadmap to eradicate human trafficking in Malaysia,” he explained.

To ensure the effectiveness of its efforts, MAPO has established strategic relationships through engagement sessions with various parties such non-governmental organisations (NGOs), diplomatic missions, international organisations and academicians locally and abroad.

With regards to dealing with activities of human trafficking syndicates through the sale of maids which are seen as rampant today, MAPO hoped that all parties including NGOs remain committed in implementing the initiative which is significant and practical.

“All quarters should intensify efforts and are united in their endeavour as well as provide pragmatic national reports to help boost Malaysia’s future ranking,” he said.

On the global level, the US State Department has downgraded Malaysia’s ranking in its ‘Trafficking in Persons (TIP) Report this year to Tier 3 (from Tier 2).

“The ranking has an indirect impact on the nation’s image and economy,” he said.

He also urged all levels of the community to give serious attention to the human trafficking issue as it will have a negative impact on the government’s development plans.

He also hoped that employers whether individuals or companies to be more responsible toward the welfare of their workers.

“Employers should ensure their workers are registered and possess valid temporary work visit passes (PLKS), pay their salaries based on the minimum wage order as well as comply with the laws and the national labour policies. These include cases involving foreign domestic workers,” he added. - Bernama Rose lives it up during Paris Fashion Week

4.Rose lives it up during Paris Fashion Week