Treat differences as an advantage in dealing with economic, health crises — PM (Updated) 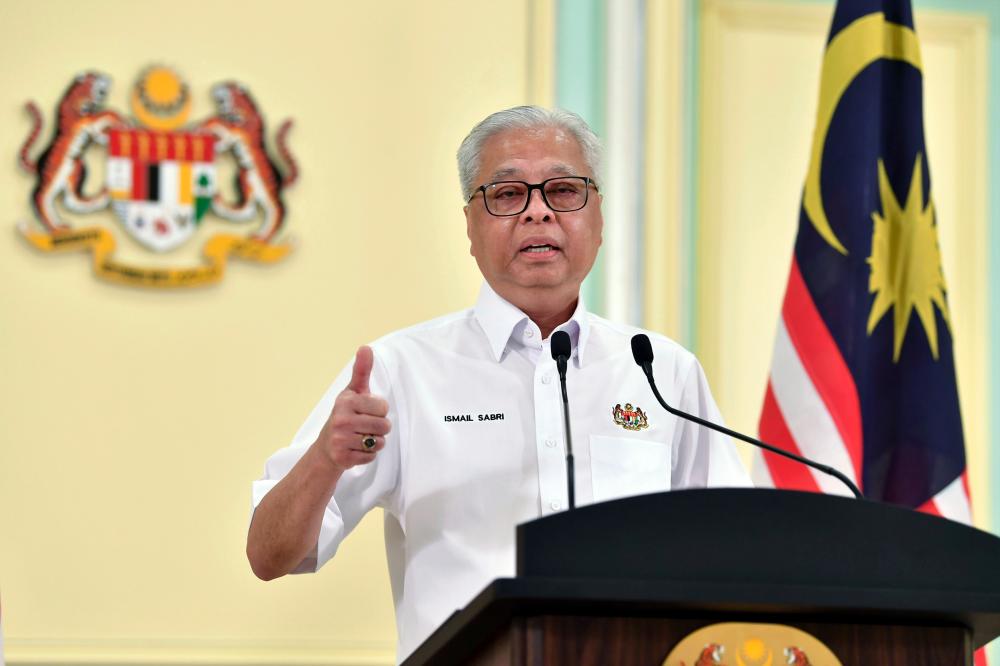 KUALA LUMPUR: Datuk Seri Ismail Sabri Yaakob (pix) has called on Malaysians to treat differences as an advantage rather than a weakness, and similarities as a source of strength in dealing with the current twin crises of economy and health.

The prime minister said as a Malaysian Family, everyone needed to work together to revive the country and adapt to new norms.

“Let us forge and strengthen unity with the bond of love and tolerance as a big Malaysian Family.

“Whoever we are, whether a father, mother, child, neighbour, employee, head of an office, community leader, religious leader or political leader, we have to play the role to revive the country for the well-being of the Malaysian Family.”

He said this in a special message in conjunction with the Maulidur Rasul 2021M/1443H celebration that was broadcast live on RTM1 today.

Ismail Sabri said the rise and fall of a race and country are dependent on their unity and solidarity.

“Rasulullah, for example, had made a peace treaty with the various tribes living near Madinah in the northern and southern regions to increase understanding and renew relations based on the principle of truth as well as to avoid chaos and clashes of power.

“Don’t let differences of opinion and approach cause us to lose our value of ukhuwah (brotherhood) and spirit of unity that have been established for so long,” he said.

Based on the belief that Rasulullah SAW is the best role model for mankind including when he became the head of state in building Madinah, Ismail Sabri said the government would continue to emulate the initiatives implemented by the Prophet as a guide in the country’s administration for the prosperity of the Malaysian Family.

“To this end, various policies, initiatives and incentives will be introduced and planned by the government so as to ensure that no members of the Malaysian Family are left behind in enjoying the wealth and prosperity of the country,” he said.

According to him, Rasulullah SAW, among others, introduced Sahifah Madinah or the Constitution of Madinah for political stability, in which its core values managed to create the elements of togetherness and mutual respect between the communities, thus uniting them as one family.

“The stability of the country in terms of sustainable health and wellbeing as well as economic prosperity were the elements that had been given special attention by Rasulullah as the caliph of Madinah. Prophet Muhammad SAW in his administrative policy also prioritised the welfare of all the people of Madinah.

“Rasulullah also ensured that the country’s revenue was shared and distributed fairly to all the people. Apart from that, he always encouraged the people of Madinah to develop the agriculture and business sectors as an economic resource at that time,” he said.

In the context of humanity, Ismail Sabri said Rasulullah was a model in upholding the brotherhood of humanity when he sought to eliminate any form of discrimination based on religion, race, skin colour or descent.

“This shows that Islam is a religion that is built on the principle of takrim al-insan or honouring of humanity.

“It is also in line with the Federal Constitution, including Article 12 which accords the right to education to all citizens without any discrimination on the basis of their religion, race, descent, gender or place of birth,” he said.

On the theme of this year’s Maulidur Rasul celebration, which is ‘Manhaj Rabbani Ummah Berkualiti’, Ismail Sabri said it led to the norms of life that emphasise the principles of the Manhaj Rabbani policy, namely blessings, peace, godliness, devotion and justice.

He said all these values were in line with the three main thrusts of the Malaysian Family concept, namely inclusivity, common ground and contentment in addition to 20 other values such as compassion, faith, love and musyawarah (consensus through discussion).

The prime minister said the theme was also in line with the National Unity Policy which emphasises the concept of Unity in Diversity where national unity and integration had long been practised in the country, including in the Maulidur Rasul celebration.

“It is done through the presentation of the Tokoh Maulidur Rasul award to an individual who has contributed a lot to the community regardless of religion and race.

“This recognition directly contributes towards producing a generation that has a spirit of unity and togetherness as well as mutual respect in line with the Malaysian Family concept,” he said. — Bernama