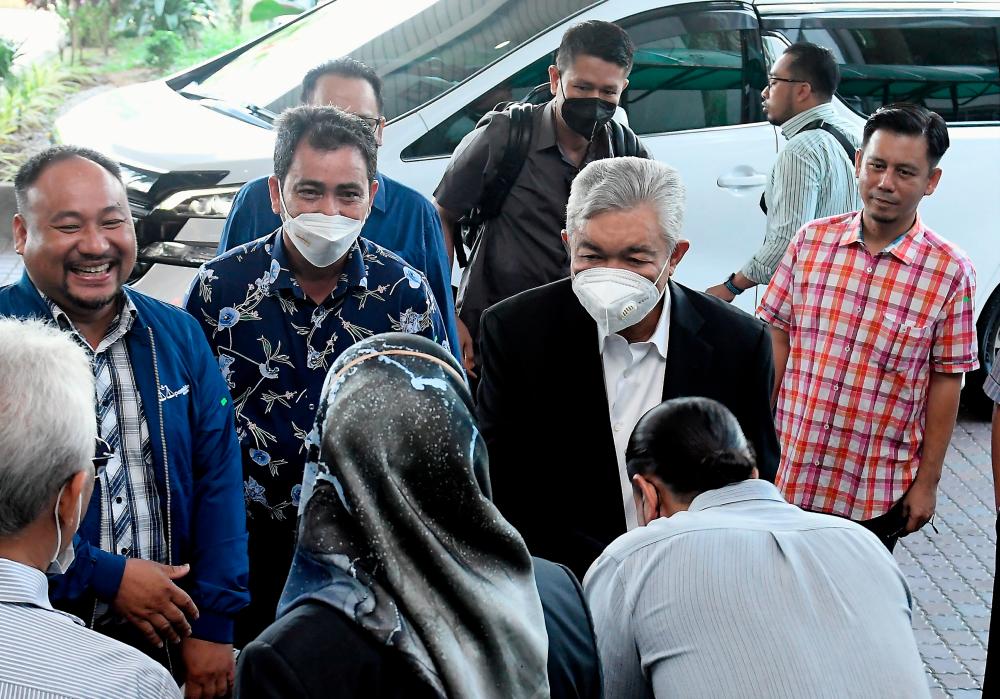 Former UKSB director Harry Lee Vui Khun said the sponsorships were on top of the monthly contributions from the company from 2014 to 2018.

“There were also months that we did not make the monthly payment, but we doubled the payment for the next month, as to cover the month that we missed.

“I personally did not keep records of the delivery, but I do know that David Tan (Administrative Manager for UKSB since 2012 up till 2018) kept a sort of a ledger on the monthly payments, which he would show me from time to time.

“I can confirm that I have seen David’s ledger, but I don’t think I would be able to explain the details in it,” he said when reading his witness’s statement during the examination in chief by Deputy Public Prosecutor (DPP) Abdul Malik Ayob.

Earlier, the 15th prosecution witness told the court that UKSB delivered cash on a monthly basis between SGD200,000 and SGD520,000 to Ahmad Zahid from 2014 to 2018 in relation to the Foreign Visa System (VLN) Contract.

Explaining how the contributions started, Harry Lee said Ahmad Zahid indicated that he needed them for his political fund and asked the witness to assist him in matters relating to UMNO.

“What I understood from this request was that Datuk Seri Zahid wanted financial assistance from UKSB. He never mentioned the amount he wanted although he did say that the contribution should be made in cash and in Singapore dollars.

“The cash money was prepared by David Tan. Once ready, David Tan would give me the envelope containing the money and I would make the delivery. Usually, the three of us - Wan Quoris (Wan Quoris Shah Wan Abdul Ghani - UKSB director), David Tan and myself would go together to Datuk Seri Zahid’s house, but the handing over of the money is done by one person only.

The witness said the delivery dates of the money were not set and it would be done at Ahmad Zahid’s convenience.

“Thus, the delivery can take place on any date of the month as decided by Datuk Seri Zahid. The handing over of the money would be done at his residence at night, usually after 10 pm, and we would ensure that there were no other visitors at his house before entering.

“We would call him first before coming to his house. Both his private and official residences had security guards or policemen, but we would always be allowed to go in without the need to report at the guardhouse,” he said.

He added that even though the payments were said to be political contributions, UKSB never made any payments into UMNO’s account nor were issued receipts or any acknowledgment for the payments.

Lee also said UKSB would never have given Ahmad Zahid any money if he had not asked for it.

“While it is true that Datuk Seri Zahid (Ahmad Zahid) did not explicitly ask us to give him money, he never questioned us about the money that we gave and not once did he ever ask us to take back the money,” he said.

The 15th prosecution witness said the first time he met Ahmad Zahid was in May 2013 at Tawakal Hospital when the Umno president’s son had met with an accident and was treated there.

“It was a short meeting, Wan Quoris and I spoke briefly about our contracts with Home Ministry (KDN). Datuk Seri Zahid (Ahmad Zahid) didn’t say much but acknowledged what we told him.

Ahmad Zahid, 69, is facing 33 charges of receiving bribes amounting to SG$13.56 million from UKSB for himself as Home Minister to extend the contract of the company as the operator of OSC service in China and the supply VLN system as well as to maintain the contract agreement to supply the VLN integrated system to the same company by KDN.

He was charged with committing all the offences at Seri Satria, Presint 16, Putrajaya and Country Heights Kajang between October 2014 and Mach 2018.