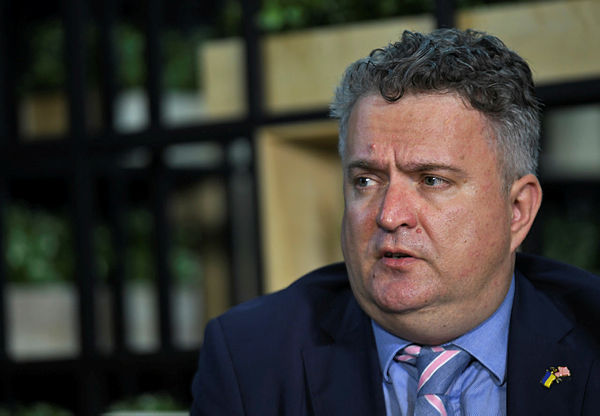 KUALA LUMPUR: Malaysia and Ukraine are currently working on concluding several bilateral agreements, including the provision of visa-free travel to the eastern European country for Malaysians.

Ukraine Deputy Foreign Minister Sergiy Kyslytsya, who is ending his two-day working visit to Malaysia today, said the preparation for the agreement has reached an advanced stage.

“We have one major technical issue and if that is resolved, in the near future we can have Malaysians arriving to Ukraine without visa. I personally believe its unjustifiable that Malaysians need visa to travel to Ukraine.

“You did not represent for us (any) immigration threat (or) other security threat, and we will be happy to see your fellow citizens in Ukraine,” he told Bernama in an exclusive interview at the news agency’s headquarters today.

He was accompanied by Ukraine’s Ministry of Foreign Affairs Director-General for the Asia Pacific Region Zhanna Leshchynska and Ambassador of Ukraine to Malaysia Olexander Nechytaylo.

The deputy minister said the bilateral agreement on the travel visa would further increase the number of tourists from Malaysia to Ukraine that are currently “negligible”, while up to 15,000 Ukrainians visited Malaysia annually.

Ukrainians can travel to Malaysia without a visa for up to 30 days, he noted.

“It may sound to some (the numbers) are not quite impressive, but I think given the distance and absence of direct flights, there are still about 14,000 to 15,000 tourists a year (from Ukraine to Malaysia). Meaning, more than 1,000 Ukrainians travel to Malaysia each month,“ he said.

He, however, believed the numbers could be further increased with aggressive promotion by Malaysian tour operators as well as promotional advertisements about Malaysia.

“You can easily see adverts on destinations like Turkey, India and Latin America, but hardly see anything about Malaysia (in Ukraine media),“ he said.

Kyslytsya, when asked on other further expansion of the bilateral ties between the two countries, said cooperation in the field of higher education were also among the topics discussed.

Though the deputy minister opined that the area is still at a very early stage, he believed there are rooms for both Ministries of Education to facilitate direct contact between tertiary educations in both countries.

“I am very much encouraged by the generosity of the Malaysian government that decided, so far to the Ukrainian citizens, to young people of Ukraine, more educational opportunities in this country.

“Still, it requires outreach, requires giving more to young Ukrainians, and it is the responsibility of both governments’ sides, I believe, ... to facilitate direct contact between the universities of both countries,” he said.

3.Warisan on track to expand to Peninsular Malaysia - Shafie