Wardrobe and pantry built at cost of RM200k, says witness in Najib’s trial 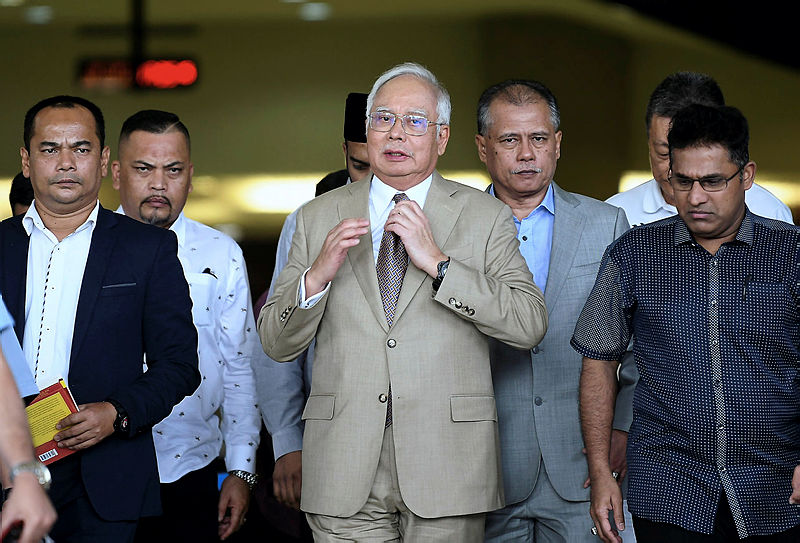 KUALA LUMPUR: An interior design company owner told the High Court yesterday that he carried out work to build a storeroom with a wardrobe and pantry at the house of the ‘number one man’ in 2014, which cost more than RM200,000.

Referring to former prime minister Datuk Seri Najib Abdul Razak (pix), Zulkarnain Mohamad, the owner of ABS Trend Master Sdn Bhd, said he received an advance payment of RM50,000 through a cheque before the work was initiated, while RM100,000 was paid out through another cheque dated Feb 15, 2015 in the name of the company after some of the work was completed.

“The construction work began in the eighth or ninth month of 2014. The work was completed within three to four months,“ said the prosecution’s sixth witness during the examination-in-chief by Deputy Public Prosecutor Muhammad Saifuddin Hashim Musaimi at Najib’s trial which is in its fifth day.

Muhammad Saifuddin: In 2014, was there or not a company asked to carry out works at Datuk Seri Najib’s home?

Muhammad Saifuddin: Can you relate how the company was first involved in carrying out works at Datuk Seri Najib’s house?

Zulkarnain: In 2014, in the 8th or 9th month (August of September), I got a call from the Prime Minister’s house manager, at that time he was referred to as the ‘number one man’. I was not sure who this ‘number one person’ was, but I went anyway. We were asked to build a wardrobe and store.

Muhammad Saifuddin: Who called you on the phone?

Zulkarnain: En Amirul Hadi. At the time I did not know who Amirul Hadi was. I met him after the Jalan Duta toll plaza, at the Shell (station there). I was then taken to the residence.

He said he met Amirul Hadi during the day and both headed to Najib’s residence at Jalan Langgak Duta, in their respective vehicles.

“Amirul Hadi asked me to build a store and a wardrobe. I asked him who the houseowner was and he replied this is the number one person’s house. I said that I cannot afford to do it, I am not qualified. But he told me, “you can do it”.

“I then said that I had to see (the area) and measure the place he wanted to build the store with the pantry and wardrobe. I took the measurements and made a draft. I left, asking for a week’s time, and informed my designer (Mohd Ikram),” added Zulkarnain.

The witness explained that the construction work was to be carried out at the back portion of Najib’s house with a quotation of RM243,000 or RM234,000.

When questioned about who paid him the cheques for the work he carried out, he said that he received them from Amirul Hadi.

Muhammad Saifuddin: Where did you receive the cheques?

Zulkarnain: At the house in Jalan Duta

Muhammad Saifuddin: While you were carrying out work at the house in Jalan Duta which you said is the house of the ‘number one person’, and all the time you were there, did you ever see Datuk Seri Najib?

Zulkarnain: I worked at the back of the house, but if he was going out (of the house), I would see him.

Muhammad Saifuddin: Did you ever speak to him?

When cross-examined by Tan Sri Muhammad Shafee Abdullah, who is representing Najib, the witness said he had not seen the former prime minister’s entire house because he only carried out his work behind it.

He added that he did not even know if the wardrobe was being made to store Najib’s clothes or that of his employees.

To another question from the lawyer on whether he had seen crowds or any ceremonies held at Najib’s house, Zulkarnain, 46, said several times a week, he had seen orphans and Tahfiz students reciting the ‘Surah Yasin’ at the house.

When asked by Muhammad Shafee as to how he knew they were orphans, Zulkarnain responded by saying it was because they were dressed in white outfits.

The witness’s reply drew laughter from those in the courtroom, including Najib.

“If he (Najib) was at home, I wouldn’t work. I only continued working once he left the residence,” he said.

Najib, 66, is facing three counts of criminal breach of trust, one charge of abusing his position and three counts of money laundering over SRC International Sdn Bhd funds amounting to RM42 million.