We are sick to the core with corruption, says Patriot 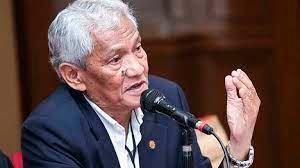 PETALING JAYA: The current news about the arrest of the leader in the project cartel who owns 150 companies and monopolised tender projects in various ministries has sent shock waves throughout the country.

Something must have gone terribly wrong with our public administration and the project tender award governance, the National Patriots Association (Patriot) said today.

“It shows that with regards to corruption and as a nation, we are sick to the core,” its president BG Datuk (Rtd) Mohamed Arshad Raji said in a statement today.

It was reported that the leader of the cartel had since 2014 secured 345 projects totaling RM3.8 billion.

“That was an astounding achievement that could only be achieved with the help of insiders within the government ministries, departments and agencies,” Mohamed Arshad said.

“Logical assumption has it that large amounts of monies were paid to the insiders who had links much higher up, including political leaders.

“Awarding the numerous government projects to a single entirety means that other deserving contractors were deprived.

“Also, an equitable sharing of wealth and job opportunities to a wider group has been sabotaged. It also made a mockery of our nation’s Shared Prosperity Vision if the so-called vision means anything, or still has credence.”

Patriot said it is appalled at the state of corruption in the country today that appears to be entrenched in almost every ministry, departments and agencies of government.

“We believe corruption among public servants is beyond redemption, made worse by the lack of courage and will among top ministry officials, heads of departments and agencies who themselves may be corrupt,” its president said.

“There are talks swirling among the general public that when top political leaders are themselves mired in corruption, getting rid of this evil, sinful and shameless conduct is an impossible proposition.”

Mohamed Arshad expressed doubts that senior ministry officials, heads of departments and agencies are oblivious to the corruption that happens under their watch.

“Irrespective of whether they know, pretending not to know, or really do not know; heads must roll,” he said.

“Patriot calls upon the Chief Secretary to the government and all Secretary General of Ministries to immediately review the project tender award governance. Emplace checks and balance procedures to ensure full-proof deterrence against corruptible practice.”

He said Patriot applauds MACC for arresting the leader of the project cartel, and there must be proper interrogation to get to the roots of this serious matter.

“Every single person involved as co-conspirator and accomplice must also be brought to book. Some among the suspects may even have honorifics before their names.

“It is only when we have stemmed the roots of all corruptions, including those involving people in top political position and high administrative office, that true nation building can start,” Mohamed Arshad added.