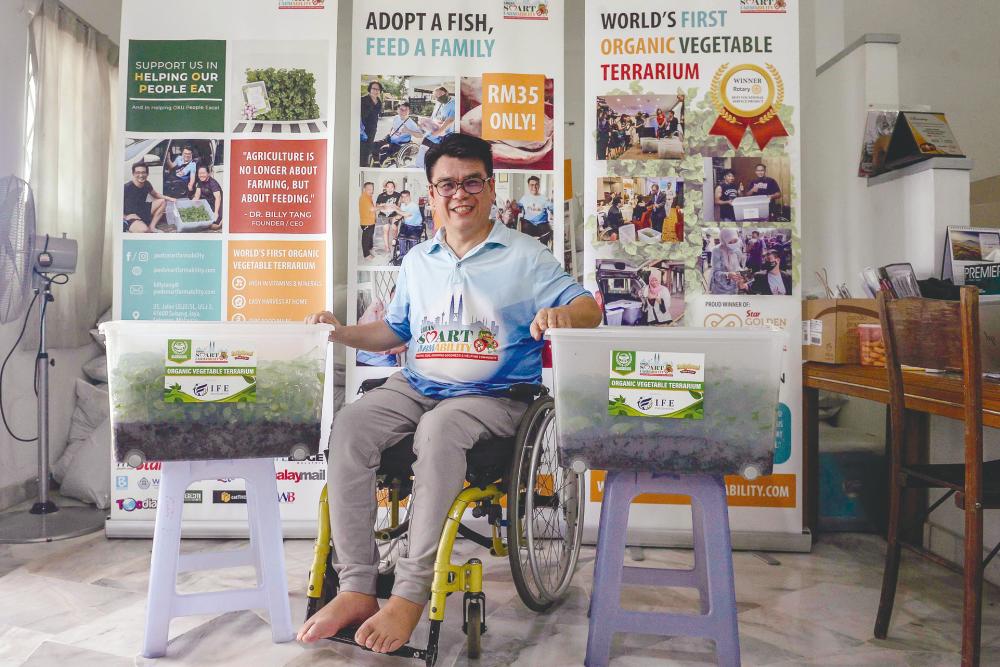 Tang shows the terrarium boxes filled with nutritious vegetables that are ready for adoption by businesses and organisations. – Adib rawi yahya/thesun

A POSITIVE attitude goes a long way in helping one recover from a major personal setback, as proven by Dr Billy Tang.

An agriculturalist and a private researcher, Tang was doing well in his chosen field until an accident left him unable to use his legs.

Despite that, he found a way to return to active life, and today runs a successful agricultural project and food advocacy programme with corporate sponsorship.

Recounting the moment that changed his life seven years ago, Tang said he was driving near a university in Kota Damansara when a motorcycle crossed his path.

“In trying to avoid hitting the motorcyclist, I swerved and crashed into a road divider. My car flipped and hit a tree,” he told theSun.

The accident injured his spinal cord that eventually rendered him a paraplegic. Tang also suffered six broken ribs and vision loss in the left eye.

The six months spent in rehabilitation in Malacca gave him the opportunity to reflect on his life and the tragedy while regaining both physical and emotional strength.

“It was then that I embraced life as a person with disability (PWD),” he said.

Tang, 55, put his experience of more than a decade in the agricultural business to good use.

“Apart from getting back on my feet, so to speak, I also wanted to help the marginalised community, including the poor,” he said.

To that end, Tang set up PWD Smart Farmability.

To help himself manage a vegetable farm, he came up with a self-watering organic terrarium box.

“The box contains nutrient-rich dense soil, making it possible for vegetables to grow for the next three to 12 months,” he explained when theSun visited his farm in Subang Jaya.

“Each box is available for adoption to encourage individuals and businesses to take on the RM150 cost of nurturing the vegetables in it. It is a low-budget supply of organic vegetables,” he said.

“Through corporate sponsorship, we also make available fresh and nutritious vegetables to the poor,” he added.

Tang said more than 2,000 terrariums or boxes of his organic vegetables have already been adopted by businesses and organisations.

His effort has drawn corporate sponsorship and a matching grant of RM500,000.

Tang’s next target is to help other PWDs through a nutrition security project.

But ultimately, the objective is to ensure that nutritious food is available to people from all economic backgrounds, he said.

“I believe that nutritious food should not be a luxury but a basic human right.” With eye on China, and US ties, Japan’s universities to screen foreigners

1.Transformation of Sarawak Bumiputera Court to be implemented next year

5.Tugboat believed to have sunk off Pulau Mantanani