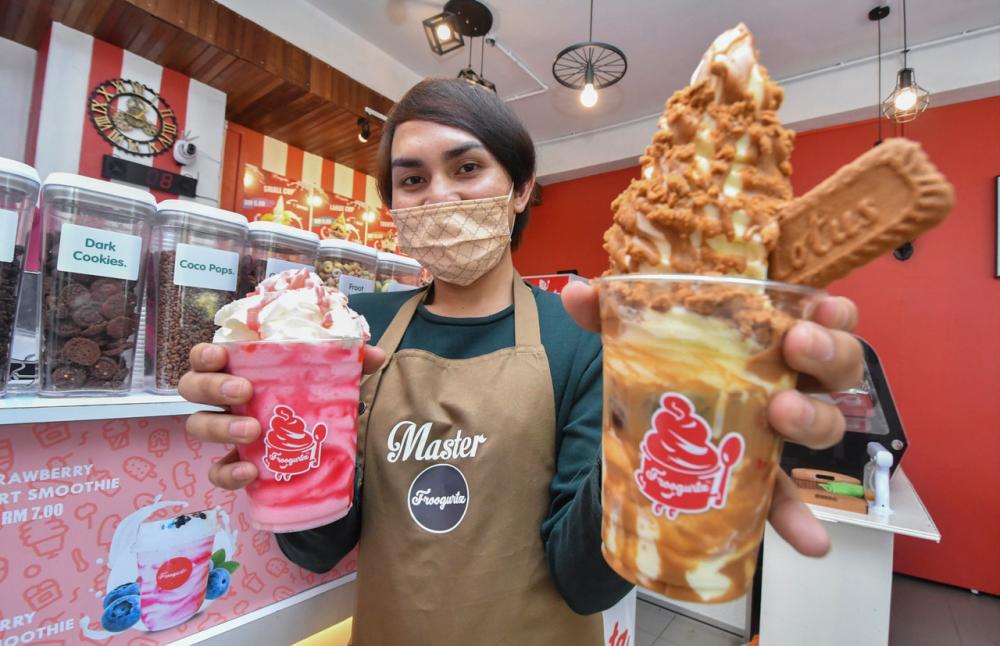 KOTA BHARU: A decision to switch career by a vocal teacher paid off with him now becoming a successful entrepreneur by operating a cafe, which he named “Froogurtz”, with frozen yogurt as its specialty.

According to Mohamad Hafizuddin Che Soh (pix), 29, he was able to earn RM100,000 a month from his “Froogurtz” cafe business.

He said his career path changed when he had to quit his job as a vocal teacher at an international school in Kuala Lumpur and returned to his hometown a year ago due to the Covid-19 pandemic.

“I was with the school since 2018. However, when the country was hit by Covid-19 hit and the Movement Control Order (MCO) was implemented in March last year, the school had to close and the service of all contract teachers, including me, was suspended.

“I was struggling to survive then and my savings were getting less. Because of that, I decided to come back to Kelantan and live with my parents in Kota Bharu and start a small business,“ he said.

Mohamad Hafizuddin, who graduated with a bachelor’s degree in Music Composition from Universiti Teknologi Mara (UiTM) said he was grateful for making a right decision.

“The frozen yogurt business made using my own recipe is well- received by the people here and the business, which I opened on Nov 1, 2020, prospers.

“Alhamdulillah, the response from customers is amazing, some of them come every day for repeat orders, and some, who are staying far, are even willing to travel all the way to get their supply of frozen yogurt,“ he said, adding that his shop in Kubang Kerian, which is about five kilometres from Kota Bharu town centre is always full of customers.

At Froogurtz, customers can get frozen yogurt or yogurt ice cream at a price of between RM6 and RM17 depending on its size. It has various tastes and offers 40 various toppings which customers can choose from, such as fruits, cereals, biscuits and sauce, like chocolate and honey.

The youngest of five siblings, Mohamad Hafizuddin, said he opted to sell frozen yogurt as it has been his favourite ice cream since his student days in UiTM.

“I always had it every weekend when I go out for my outing and since I don’t see anyone starting this business yet here, I think it will be a good business for me,” he added.

He said he started selling the frozen yogurt at a kiosk in a shop house near Bandar Baru Tunjong before moving to a bigger shop last March 1.

Mohamad Hafizuddin, who has six employees to help him at the shop, is now preparing to open his second “Froogurtz” outlet, which will be in Wakaf Bharu this August before expanding the business to other districts in Kelantan, as well as to other states.- Bernama