With individuals at peace, there can be world peace: Prem Rawat 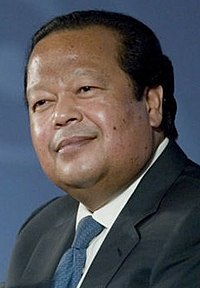 KUALA LUMPUR: When wars really start from the minds of men, where could the resolution be for ending the wars? Logically, shouldn’t it be also coming from the being of men where it originates?

Perhaps the way to get rid of wars is not by trying to stop the wars but rather to bring peace, beginning with each individual and, with individuals at peace, there could be the possibility for world peace, says Global Peace Ambassador Prem Rawat, who was in Kuala Lumpur recently for a series of events.

Prem Rawat, who has relentlessly shared his message of peace for more than five decades, says a common understanding of what peace really is should be brought to the forefront so that collective efforts can be taken to chart the route to world peace.

Responding to a question, from Nabilah Salleh of Bernama International News Service during an interview at Wisma Bernama, on what he had yet to see happening in the international arena in terms of achieving peace, he said: “Something that really hasn’t happened (is) where the world leaders have started to commonly understand a common definition of peace. Peace still remains a very elusive subject.”

Very little is being done for peace at the fundamental level, on a very grassroots level, and everyone is looking at it like it’s going to fall from the sky, he said.

“What’s special about this earth – it supports life! And one of the things that it supports is human beings. (When) the environment is conducive, we can exist. And what are we doing? We’re fighting. Where do we go? It’s not like some of us can just say, ‘Oh, yeah, I don’t get along with you; I’m going to go to Mars. We need to understand what it means to live together”.

To a question on what alternative there is towards peace, he reiterated that individuals having the understanding of peace would be the way to go.

“We need to try – we need to at least take a look at things we haven’t tried! We have tried a lot of things, but there are things we haven’t tried. And one that is simple is the basic respect for human beings,” said Prem Rawat who, besides several other engagements, also presented a talk on “Peace is Possible – Finding Your Inner Strength” at the Kuala Lumpur Convention Centre recently.

Prem Rawat, who has visited the Hiroshima Peace Memorial Park in Japan shortly before his visit to Malaysia, spoke of the tragedy of the bomb that had devastated the city during World War II and how much has not changed since.

“What have we understood? Wars are still happening. And there’s no one thing that’s going to solve the problem. But every human being taking on that responsibility of knowing themselves, and establishing peace for themselves, that’s the only solution that has not been tried.”

If wars are accomplishable, then peace is possible too. Peace could be humanity’s greatest achievement, he said.

Prem Rawat also spoke of the nature of the peace that he talks about, describing it as a resource that is already available in each human being.

“Peace is all that is good in you. War is the absence of peace. Peace is kindness, joy and gratitude that exists in your heart”.

In keeping with his approach to peace as not simply an idea or concept but rather a practical experience that an individual can discover and enjoy, Prem Rawat recently introduced his first app-based course on personal peace called Peak or Peace Education and Knowledge.

The Peak, a free educational programme aimed at helping people discover their inner potential for personal peace, is an extended version of the complimentary Peace Education Programme (PEP) which was introduced several years ago and has gained tremendous success over the years.

The programme has been adopted by many public and private institutions worldwide and is also available in 27 languages, including Bahasa Malaysia, Mandarin, Tamil, Hindi, Arabic and Spanish. — Bernama